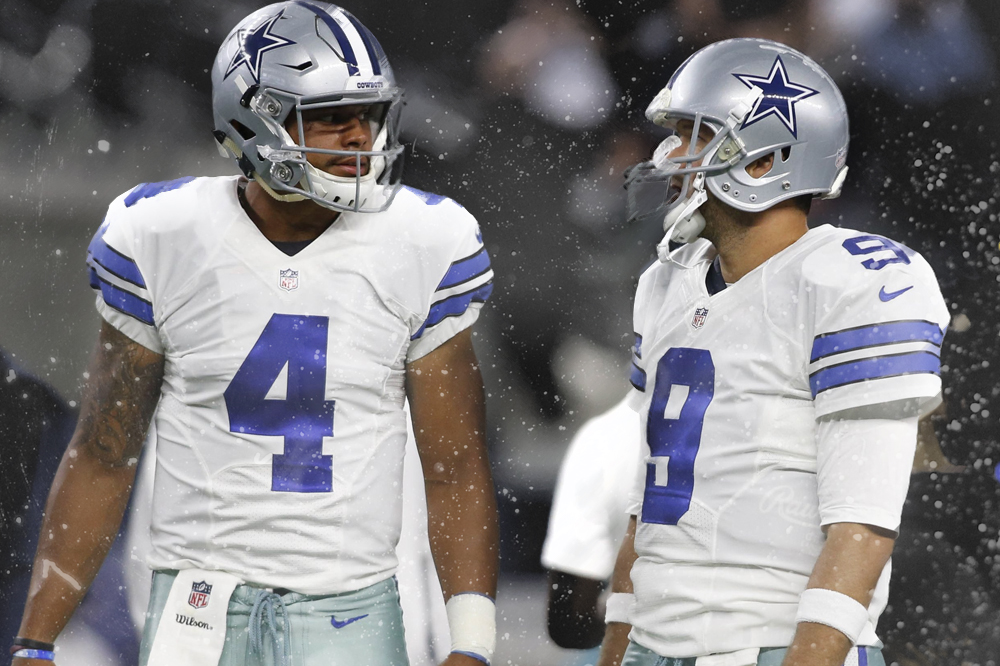 The hottest rivalry in the country right may not be Hillary Clinton vs Donald Trump, but rather Dak Prescott vs Tony Romo. And according to fans of the famed franchise Dallas Cowboys, the stakes are even higher!

This past Sunday, things were looking bleak for Dak Prescott. He completed only five of 13 passes in the first half of the Cowboys game against the Philadelphia Eagles, including a bad interception in the end zone late in the half. What was going to happen next seemed to be faith. The inevitable struggles for a rookie QB meant the near return of the legendary starter Tony Romo, who is almost healthy after a preseason back injury.

But Dak could not have written a better storyline, as with the Cowboys down 23-13 in the fourth quarter, he engineered a 90-yard drive, including a 22-yard touchdown throw to Dez Bryant with three minutes left in the game to tie it. Dak completed all five of his passes on the first drive of overtime and threw the game winning TD pass to Jason Witten to lead the Cowboys to a 29-23 win. The Cowboys have won six straight games and have a two game lead in the NFC East with a 6-1 record.

Cowboys Owner Jerry Jones said after the game that Dak would start Sunday against the Cleveland Browns with Romo still not ready for game action. Jones, who doubles as the team’s general manager, has made clear for most of the season that Romo would return as the starter when healthy, but recently backed off those assertions. After Sunday’s game, Jones actually said, “When you have the hot hand, you have to ride it!”

Few NFL players are hotter than Dak Prescott right now. He ranks third this season in ESPN’s QBR rating, which accounts for both passing and rushing stats by QBs. Only MVP candidates Tom Brady and Matt Ryan are ahead of him. Dak has accomplished this with his best receiver, Bryant, sidelined for three games. The Cowboys are likely to be 7-1 after next week’s game against the winless Browns.

Dak Prescott, 23, can be labeled the QB of the future. Romo will be 37 in April and his future is complicated by the six-year, $108 million contract he signed in 2013. Romo’s salary cap figure is roughly $25 million each of the next three seasons. That figure doesn’t work as a backup. NFL bonuses are amortized over the life of the contracts for salary cap purposes, meaning that the Cowboys would be on the hook for $19.6 million in “dead” cap space if they release or trade him ahead of the 2017 season. The dead money shrinks to $8.9 million after 2017.

Dak is under contract for four years at a total of $2.7 million as a fourth-round draft pick. Having a starting QB eating up so little salary cap space can be a huge advantage since the going rate of a decent QB is $20 million per year in today’s NFL. Witness the Seattle Seahawks and Russell Wilson, who had a similar contract to Prescott. The Seahawks were able to re-sign many of their defensive stars since Wilson’s cap number was so low before he signed a $87.5 million deal last summer. Finding a new home for Romo would free up $5.4 million in cap space for next year and nearly $50 million for the following two years.

A Cowboys revival would also be good for the NFL and its networks, which have struggled with lower ratings this year. The Cowboys haven’t won a Super Bowl in two decades and have only one winning season the past six, but are still America’s Team and the biggest draw on TV. They were part of half of the 10 most watched regular season games in 2014. The three most watched NFL games of 2015 involved the Cowboys and the team finished the season 4-12. Last week’s Cowboys game against the Green Bay Packers was the most watched NFL game this season so far with an average audience of 28 million.

So do the Cowboys stick with Dak,or go with the expensive legend in the twilight of his storied career? We’re HustleTweeting about the Dallas Cowboys, and you’re more than welcome to join the conversation by following the Hustle on Twitter HERE or by hitting LIKE on our hyper-interactive Facebook page HERE!