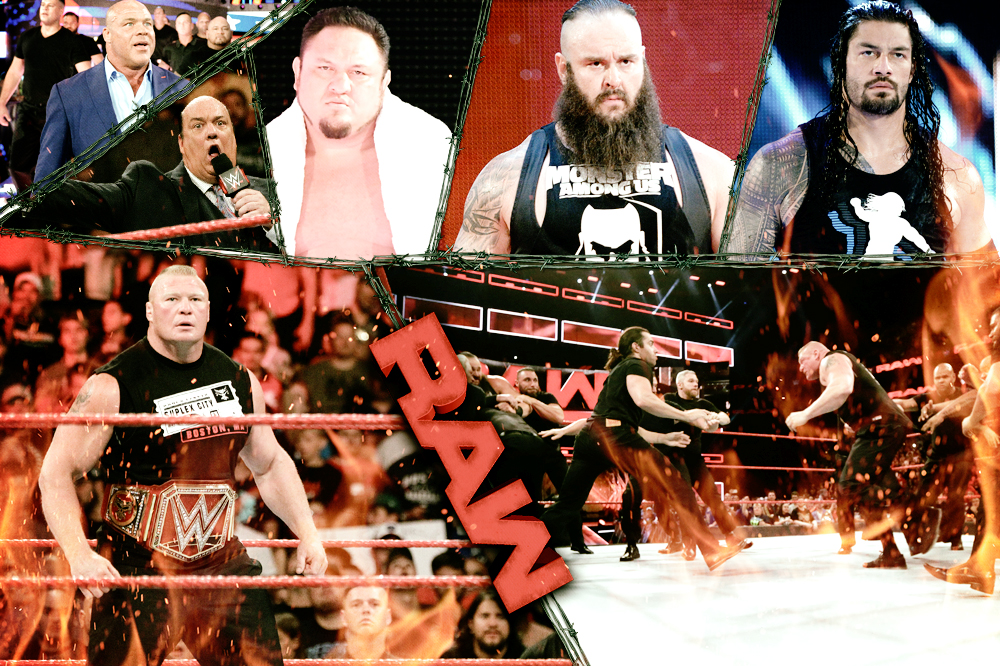 Universal Champion Brock Lesnar and his Advocate Paul Heyman came to Boston, Massachusetts … and all hell broke loose. Samoa Joe, Braun Strowman and Roman Reigns are the challengers. Lesnar is the champion. There is no champion’s advantage in the Fatal 4-Way this Sunday at WWE SummerSlam, and our boss had a lot to say about that.

According to a report on WWE.com:

Brock Lesnar might be out the door if he loses the Universal Title on Sunday, but if this is The Beast’s last Monday Night Raw, it should be no surprise he went out in a hail of fists and a confrontation that needed every warm body in the locker room to quell it before it escalated into what Paul Heyman called a “prison fight.”

After Heyman delivered what might be his final sermon in exaltation of the reigning, defending, undisputed Universal Champion, Lesnar’s challengers surfaced one by one: first Samoa Joe, then Braun Strowman and finally Roman Reigns. The Big Dog quickly speared Joe in retaliation for The Samoan Submission Machine costing him his Last Man Standing Match against The Gift of Destruction the week prior, and Strowman disposed of Reigns with a Running Powerslam.

That left The Beast and The Monster Among Men alone in the ring, and while they made quick work of the legion of security Kurt Angle had hired to enclose the ring, the near-entirety of the Raw locker room barely managed to separate them, though Lesnar and Strowman briefly broke free to land a few wild punches. The rest will have to wait until Sunday, and the titanic main event that could change Raw as we know it.

We’re HustleTweeting about WWE Monday Night RAW and WWE SummerSlam, and you’re more than welcome to join the conversation on the Hustle Twitter HERE and also on our hyper-interactive Facebook page HERE!