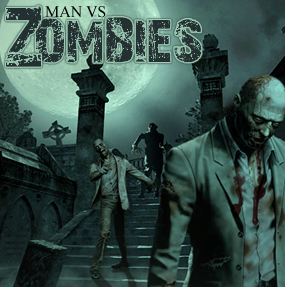 Deep In The Dark Recesses of the Twitter World Lies A Sub-Culture That Is Home To America’s Next Great Super Hero … And He’s Baaaaaaaaaaaack!

One of the most popular discussions amongst our HustleTweeters is the ongoing saga of @manvszombies, the wild story of Gus The Zombie Slayer.

Based in Miami, with a healthy imagination that drives the story, Man vs Zombies is a perfect example of the new viral marketing storylines that first came into prominence with "The Blair Witch Project" and then exploded with "Paranormal Activity."

Gus’ exploits became the subject of daily chatter, with his zombie-killing-adventure analyzed from all perspectives. Part action-adventure, part drama, part comedy, part parody, and part social commentary, the mysterious tweets sudden stopped early in the summer, leaving fans across the world wondering not only what happened to Gus, but what happened to the storytellers behind the one man army against the undead.

And then, all of a sudden, as if nothing went wrong …

Man vs Zombies fans around the world have been HustleTweeting the past few days with glee over the return of the legendary Gus, one of the great Twitter action heroes for our generation.

One quick warning: Man vs Zombies is addictive. Only start reading … AT YOUR OWN RISK!