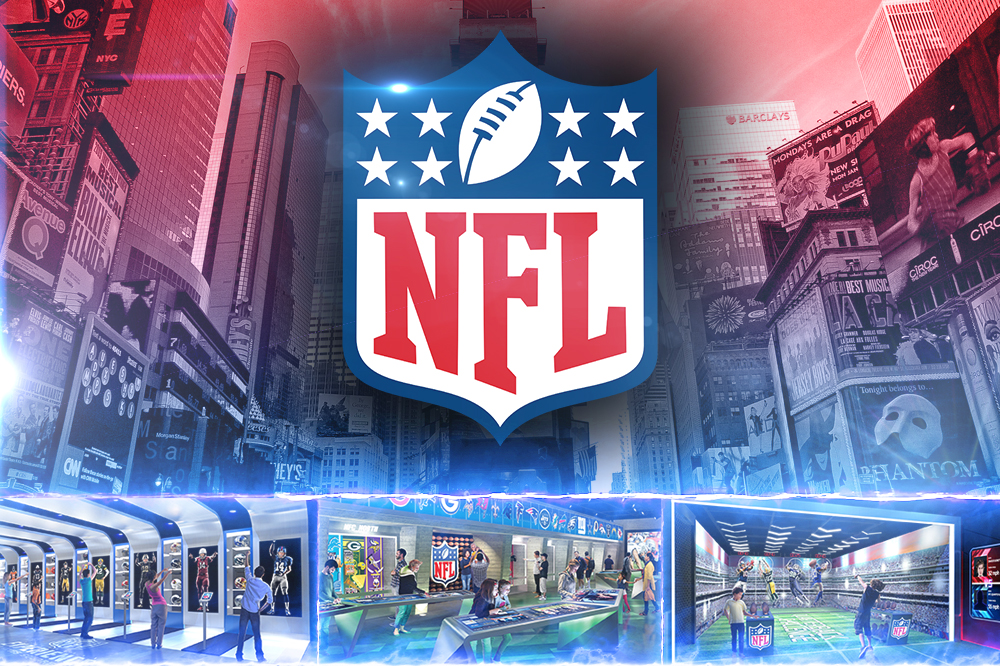 After months and months of speculation, NFL Experience Times Square today revealed the first detailed look inside the state-of-the-art interactive attraction that promises to bring football fans closer to the game than ever before. Opening this November in the very heart of New York City’s Times Square, the NFL Experience Times Square offers fans a chance to step into the shoes of an NFL player using a 4D cinematic experience, physical challenges, augmented reality, and various immersive elements to give fans the ability to step into the huddle.

Tickets for this brand new NFL-themed attraction are on sale starting today. Tickets are available exclusively at https://www.nflexperience.com/ beginning at $39.00. 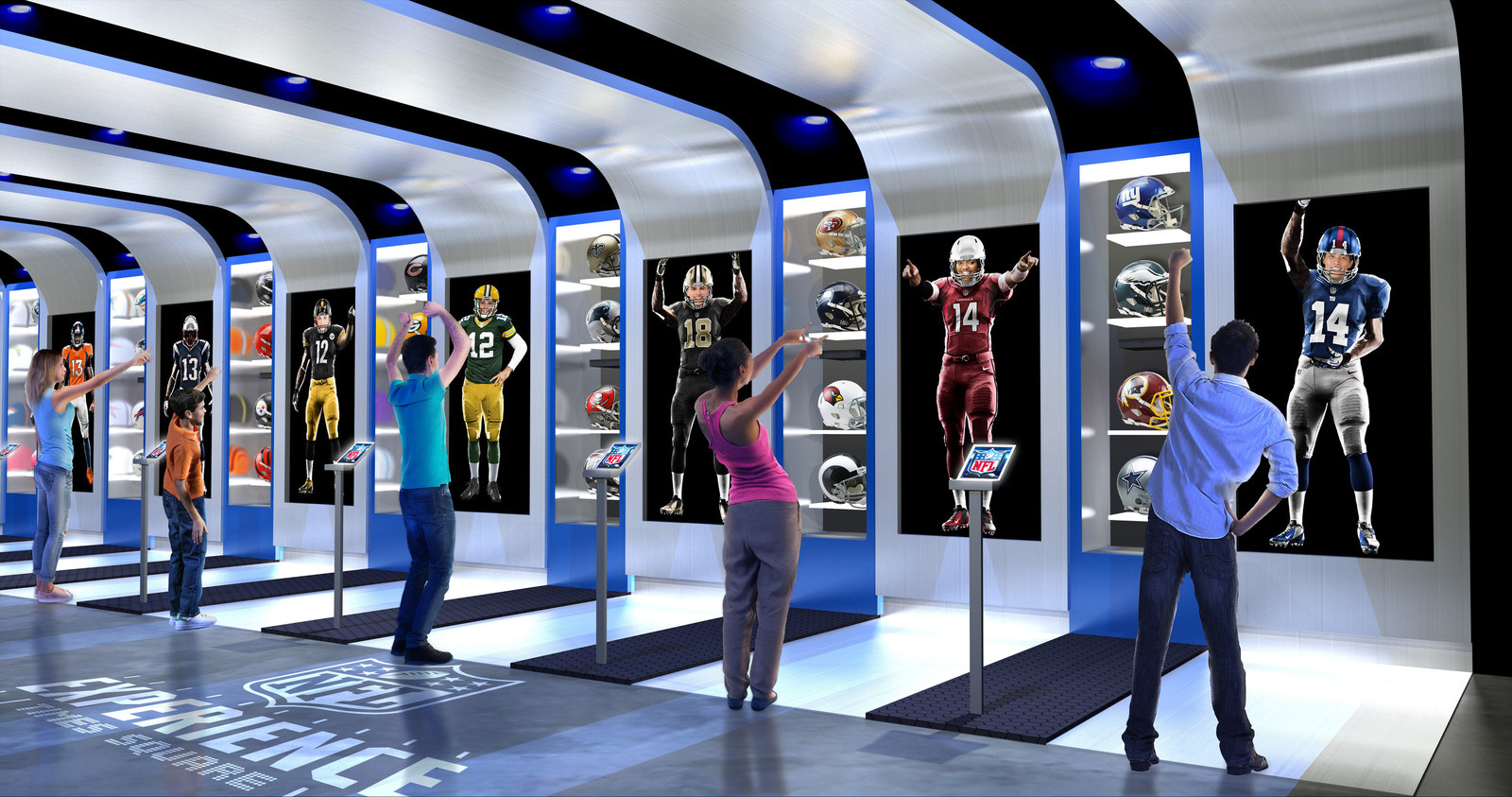 From the ground floor lobby located on 44th Street at 7th Avenue, visitors take the elevator up to the fourth floor where they are transported into the rituals of game day. Passing a “Wall of Fame” with personalized messages from NFL legends, visitors are invited to explore the rich history of America’s game through videos playing on jumbotrons. Participants can test their favorite team knowledge with more than 20 interactive touchscreen stations representing all 32 NFL teams. As they make their way towards the theater, fans pass displays of iconic items such as the Terrible Towel in Pittsburgh and the Cheesehead from Green Bay.

Visitors then take their seats inside the 4D theater for “Gameday”, an immersive film with exclusive content from NFL Films. The 185-seat theater is designed to evoke the feeling of being in a packed football stadium, boasting wall-to-wall high-tech screens, cutting-edge motion seats and temperature controlled elements for a highly sensory experience that transforms viewers from fans into players.

The multi-media film follows the player’s pursuit of the football throughout the season and tracks the emotions of the NFL season: the exhilaration of September, the trials of October, the thrill of November and the achievement of making the Playoffs in December. The audience feels a surge of adrenaline as they become the wide receiver running down the field while the defense rushes towards them, feeling the cool air as fall turns to winter. This view of the game will show it in a way never experienced before: the speed, the intimate nature of the field, the closeness of the stands and the sidelines.

The audience exits the 4D theater on the third floor having won the Conference Championship game and enters the “Locker Room” to the sound of cheers and real post-game speeches from NFL coaches. Now in the inner sanctum of the players, fans move through a “Training Facility”, tasked to prepare for the upcoming Super Bowl. Designed to replicate an authentic NFL team workout facility, fans can “Measure Up” to the pros with a series of interactive challenges – including a vertical leap test and blocking obstacles that compare guests’ abilities with the best on the offensive and defensive lines.

Using a combination of enhanced visual effects and Kinect technology, fans can then “Suit Up” as part of their favorite NFL team. Once the system digitally “builds” the body armor and uniform on their live image, fans can see their physical prowess in the team uniform of their choice.

Moving from training the body to sharpening the football mind, fans in the “Game Plan” are then given one-on-one instruction from a hologram of a NFL legendary coach. Just like NFL quarterbacks, fans prepare for their upcoming opponent by learning a new play in a space that replicates a coach’s classroom, complete with a large digital whiteboard that comes to life with the game’s X’s and O’s.

In “Huddle Up”, visitors step into the middle of the huddle as their team’s quarterback. With fame and glory on the line, fans must take command of the huddle and lead their team to execute the new play. Call the play, read the defense and get the play off in time, all while the coach is watching from the sidelines.

Now the fan is ready to enter the biggest game – The Super Bowl – where they can test their skills by throwing a real football to their favorite receiver, feeling the thrill of a Super Bowl victory by completing the game-winning pass. The “Quarterback Challenge” tracks the football’s speed, accuracy and completion percentage and compares it against fans’ favorite world-class quarterbacks.

Transformed from players to champions, visitors descend to the second floor where they are enveloped in the swelling sound of cheering fans surrounded by their teammates. Integrated LED lights simulate a lightning storm of camera flashes and capture the excitement of the player’s arrival on the NFL‘s biggest stage.

Now in the middle of the world’s biggest victory celebration, the field comes to life with augmented reality immersing visitors in the pomp and circumstance of a Super Bowl win through the eyes of a pro. Fans celebrate with their heroes feeling the joy of conquering every opponent to reach the pinnacle of the sport. Fans can be interviewed by a reporter to tell them how it feels to have trained physically and mentally to win the Super Bowl.

As a champion, fans have earned the right to share the stage with the Vince Lombardi Trophy and experience the iconic trophy up-close just like a Super Bowl victor. 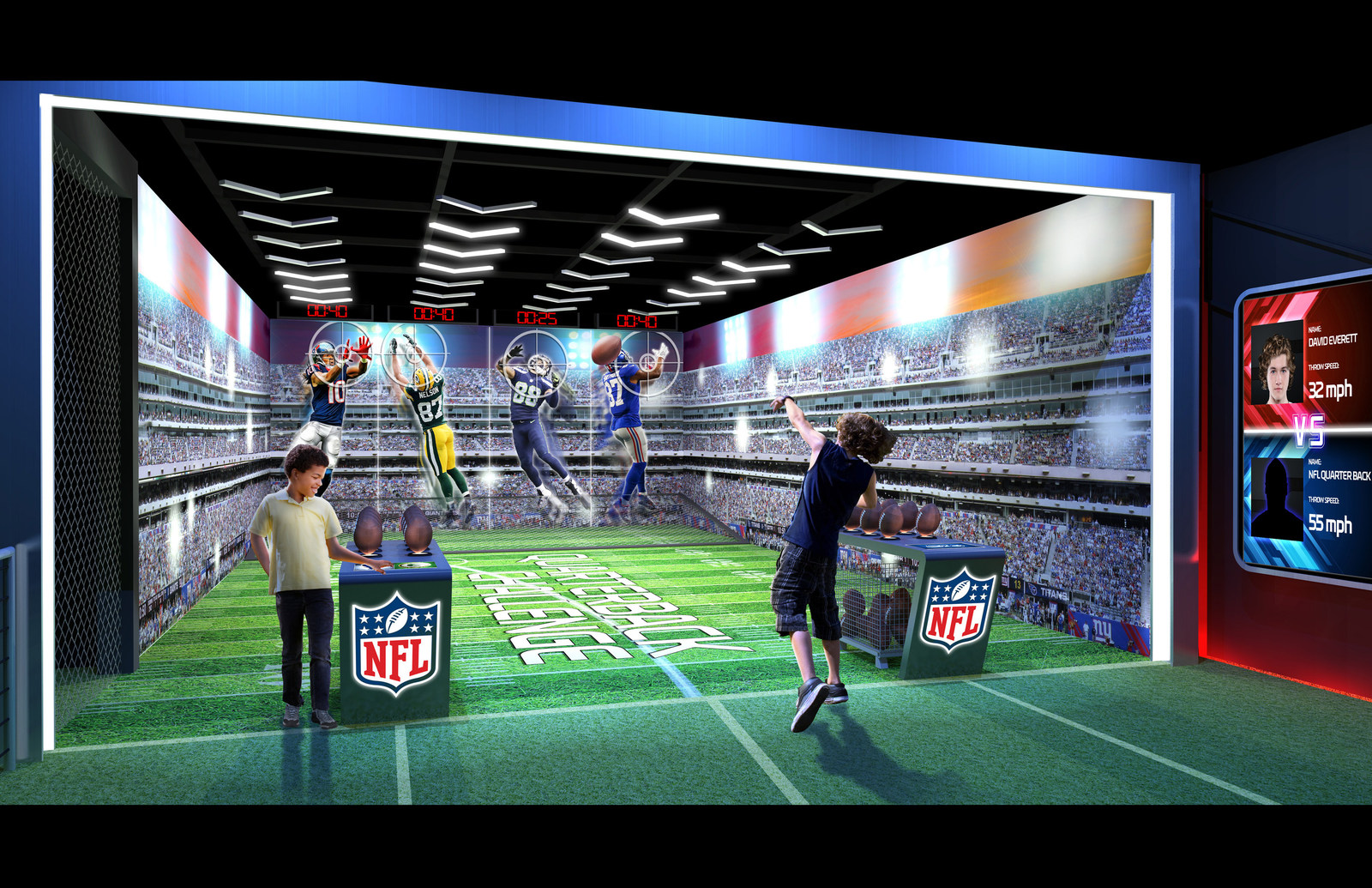 Fans then move to an installation showcasing the NFL‘s most personal prize – the Super Bowl ring. The ring’s design is the most intimate expression of the team’s season and the guiding principle that got them to the top.

Fans exit through the tunnel of champions, where they are immersed in video showing highlights of their heroes’ greatest on-field moments. By the end of the tunnel, fans see their own highlights and maybe even their on-field Super Bowl interview.

Fans can celebrate by doing their own “Touchdown Dance,” which could even be televised in Times Square.

And there’s so much more (trust us, just trust us) that hasn’t been disclosed yet.

We’re HustleTweeting on the revolutionary (and evolutionary) NFL Experience Times Square, and you’re more than welcome to join the conversation on the Hustle Twitter HERE and also on our hyper-interactive Facebook page HERE!