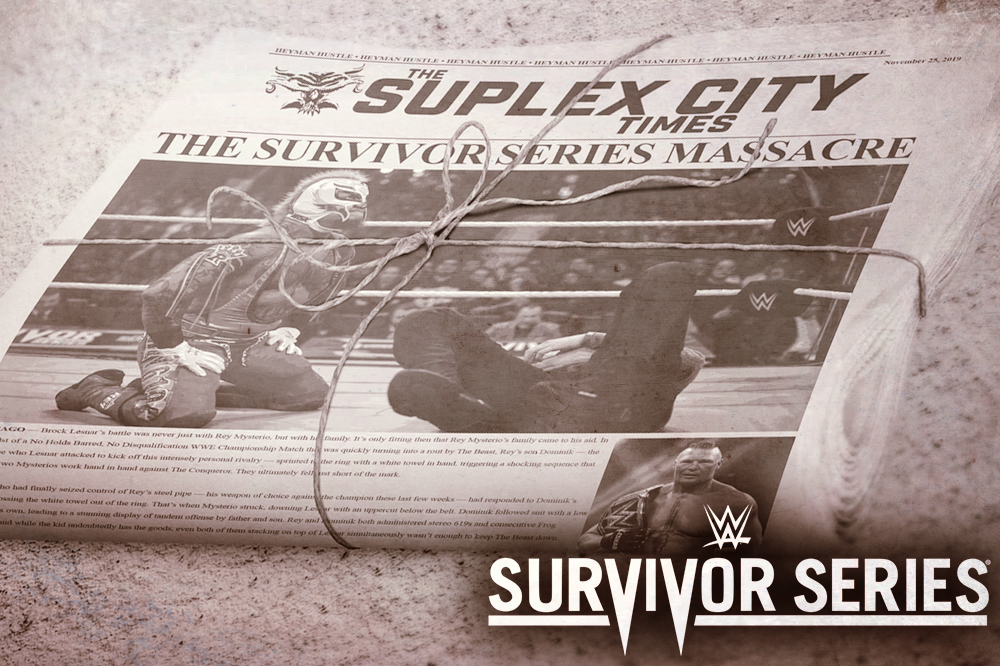 The No Holds Barred Maestro of the Massacre is still the reigning defending undisputed WWE Heavyweight Champion of the World. In a truly thrilling battle, Brock Lesnar (accompanied by his Advocate, our boss Paul Heyman) successfully retained the title against the challenge of Rey Mysterio … and Mysterio‘s son Dominick! According to WWE.com:

Brock Lesnar’s battle was never just with Rey Mysterio, but with his family. It’s only fitting then that Rey Mysterio’s family came to his aid. In the midst of a No Holds Barred, No Disqualification WWE Championship Match that was quickly turning into a rout by The Beast, Rey’s son Dominik — the same one who Lesnar attacked to kick off this intensely personal rivalry — sprinted to the ring with a white towel in hand, triggering a shocking sequence that saw the two Mysterios work hand in hand against The Conqueror. They ultimately fell just short of the mark.

Lesnar, who had finally seized control of Rey’s steel pipe — his weapon of choice against the champion these last few weeks — had responded to Dominik’s pleas by tossing the white towel out of the ring. That’s when Mysterio struck, downing Lesnar with an uppercut below the belt. Dominik followed suit with a low blow of his own, leading to a stunning display of tandem offense by father and son. Rey and Dominik both administered stereo 619s and consecutive Frog Splashes, and while the kid undoubtedly has the goods, even both of them stacking on top of Lesnar simultaneously wasn’t enough to keep The Beast down.

The champion kicked out at two and, even visibly down a step after the uppercuts, still had the strength to German Suplex Dominik off the top turnbuckle when the Mysterios went for stereo splashes on either side of the ring. Rey took flight anyway, only for Lesnar to snatch him out of the air and F-5 him for the victory. Lesnar, having had enough for one night, made his exit, and Rey will have to take solace that his challenge ended up being more miracle than massacre — even if it inevitably had the same ending as one.