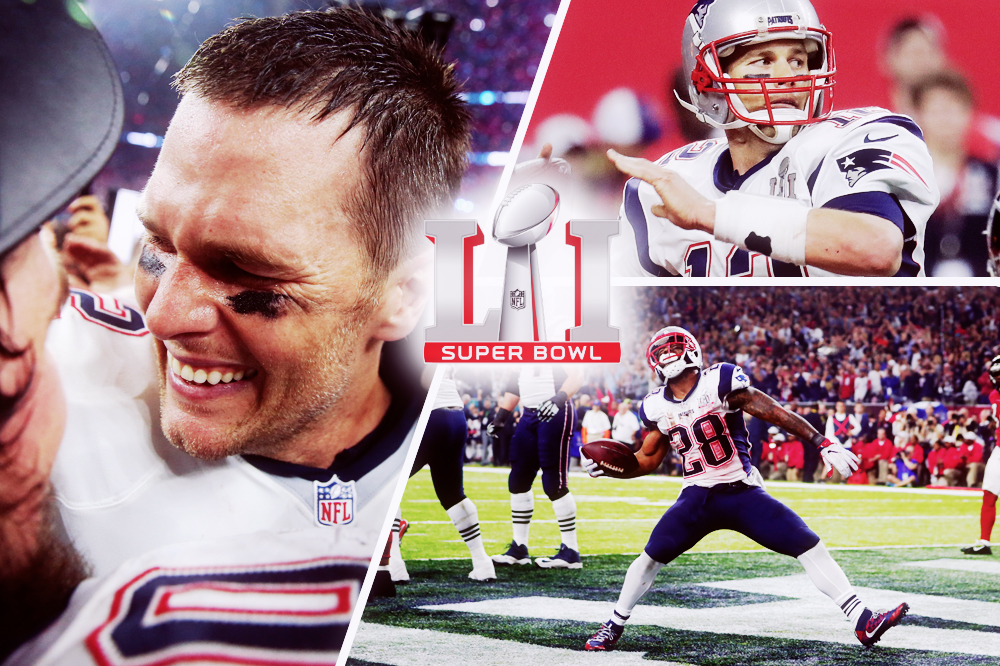 Tom Brady led an offensive charge that will go down as unquestionably the greatest comeback in Super Bowl history. Down 25 points in the third quarter, Brady came back in the fourth quarter with a game that now has pundits calling him the greatest quarterback of all time. The Patriots, down and damn near out against the Atlanta Falcons, forced an overtime and then won their fifth Super Bowl, 34-28. Brady captured his fourth Super Bowl MVP award by throwing for 466 yards and two touchdowns.

Brady and the Patriots officially grabbed the Lombardi Trophy after James White capped the Patriots’ overtime drive with a 2-yard touchdown run, ending an eight-play, 75-yard drive against an exhausted Falcons defense.

“It was unbelievable,” Brady said afterward.

By rule, a team scoring a touchdown on the first possession of overtime is the winner. Atlanta never got the ball.

The victory will go down as arguably the sweetest in Patriots lore, as team owner Robert Kraft said as much in the postgame celebration as he received the championship trophy from commissioner Roger Goodell, a ceremony that was equally loud in cheers for the champs and boos for the league commissioner.

“A lot has transpired over the last two years”, Kraft said, obviously talking about deflate-gate. “I don’t think that needs any explanation.”

The win was historic in nature.

Comparatively unknown, yet undaunted, the Falcons jumped New England and appeared to be cruising to the franchise’s first Super Bowl victory.

With speedy playmakers on both sides of the ball, the Falcons ran the vaunted Patriots off the field early, jumping to leads of 21-0 and 28-3 in what looked to be an unexpected rout. Previously no team that ever trailed by more than 10 points in a Super Bowl had come back to win.

Yet Tom Brady and the Patriots refused to quit.

Facing the kind of massive second-half deficit that in the past has caused so many Super Bowl teams to quit and face a blowout, the Patriots fought back, and put together a game plan that simply worked.

There was a Brady to James White 5-yard touchdown pass. Then there was a Stephen Gostkowski field goal. Then, after a strip sack by Donte Hightower of Matt Ryan set the Patriots up deep in Atlanta territory, Brady hit Danny Amendola for a 6-yard touchdown. They then converted the two-point conversion.

With less than three minutes left, Brady, trailing 28-20, led an epic 91-yard touchdown drive that will rank among the most astounding in NFL history.

“He was the same as he always is – cool, calm and collected,” said Patriots receiver Danny Amendola. “He’s the leader, the general, the best ever and that is the end of the story.”

They moved the chains on an out to Chris Hogan and then another to Malcolm Mitchell. Then Julian Edelman caught a wild one after a deflection that was the Patriots’ answer to the old helmet catch that once did them in. That one went to 28. Three plays later James White scored on a 1-yard run. Then Brady hit Amendola for the tying two-point conversion.

White finished with 14 receptions for 110 yards and totaled three touchdowns, one receiving and two rushing, one of which made the Patriots champions.

We’re HustleTweeting about Tom Brady and the New England Patriots, and you’re more than welcome to join the conversation by following the Hustle on Twitter HERE or by hitting LIKE on our hyper-interactive Facebook page HERE!