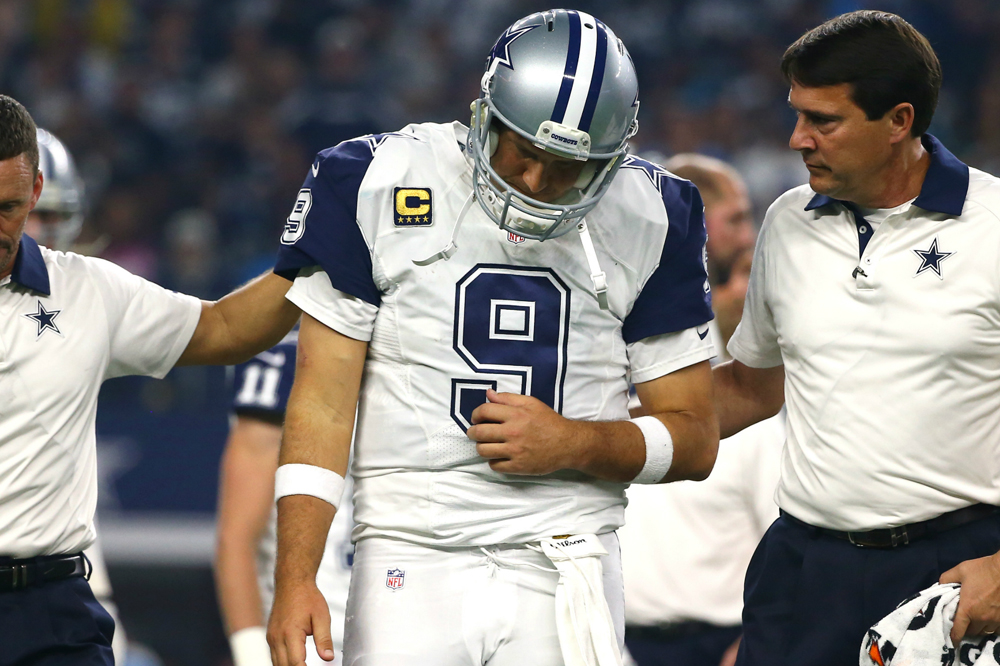 When Dallas Cowboys quarterback Tony Romo suffered a broken bone in back on the third play of Thursday night’s preseason game, the entire football world collectively gasped. Romo, one of the league’s biggest superstars, got an MRI on Friday, which revealed the back injury was even worse than anticipated. “We’re confident (Romo is) going to be coming back and playing football (for the Dallas Cowboys) this year,” stated coach Jason Garrett, even though the best-case scenario for Romo’s return is during the middle of the season. That’s only if Romo’s timetable of six-to-ten weeks on the sidelines remains accurate once he starts the long road back to being in condition to lead the team on the field.
Romo underwent a pair of back surgeries in 2013 and he missed most of last season with a twice-broken left collarbone. Garrett said the injury is not related to the surgeries Romo had in 2013.

On Dallas’ third offensive play on Thursday night, Romo scrambled from the pocket, then went into a slide near the line of scrimmage. He was crunched by Seattle Seahawks defensive end Cliff Avril from the blind side.

With Romo out, rookie fourth-round pick Dak Prescott likely will start the regular-season opener against the New York Giants on September 11th.

The debut of a new quarterback, not a new thing for the Cowboys, is yet another chance for the team ponder the post-Romo world for the Dallas football club. With just two weeks to go before the game against the Giants, not much is known about Prescott in terms of his NFL capabilities. You can’t judge him on pre-NFL games, it’s a whole different culture and level of play. The Giants are stepping into a game against an unknown commodity, but that unknown commodity does not have the pedigree that has everything convinced he will ultimately be Romo’s replacement. It makes for a great Cinderella story, or just another chapter in the Dallas Cowboys search for what happens when the fabled career of Tony Romo comes to an end.

We’re HustleTweeting about the Cowboys, Tony Romo and Dak Prescott, and you’re more than welcome to join the conversation on the Hustle Twitter HERE and also on our hyper-interactive Facebook page HERE!