Tony Soprano Whacks A Paparazzo On The Streets of New York City! 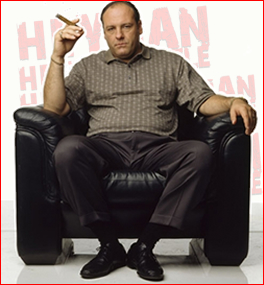 James Gandolfini made a paparazzo an offer he couldn’t refuse. “Get the fuck away from me.” That was the extent of the offer. We think the videographer got the message after the actor who portrayed Tony Soprano popped the pap.

Gandolfini was out with his ex-wife and their son on Halloween in the West Village section of Manhattan when he noticed the paparazzo, who submits videos to the popular NYC-centric GUEST OF A GUEST website. It’s known that Gandolfini does not like the media around his son Michael, and when he saw the videographer shooting the Trick Or Treat candy-hunting, he went Full Metal Soprano on the paparazzo.Of course, THE ENTIRE SCENE WAS CAUGHT ON VIDEO, which means a little bit of Hollywood has now invaded New York City. But New Yorkers know how to deal with that, if you catch our drift.

In an UPDATE POSTED BY THE PAPARAZZO, the incident was described this way:

“I was getting ready to go out for the night to shoot the Halloween parade and then was planning to go shoot the rose bar for you. I was walking up Jane Street towards the parade route, when I saw James trick or treating with his son and some other people. I decided to shoot some video of him, his son was inside a botique trick or treating, jim was standing outside.

I was maybe 25 feet away from him when he saw me. he then rushed towards me and pushed me into the street, then he took a swing at me and knocked the camera down. The person yelling get away from my son, was not my mom, but james ex-wife telling me to get away from her son. Then after the camera cut off, I tried to walk away, I got tackled from behind by one of his companions, right in the middle of the street, he was trying to steal my video away and ripped my jacket he tore away my still camera and it fell to the ground and broke. I then managed to break free and run back to my hotel.”

Here’s official advice, as discussed this morning at the offices of Looking For Larry Productions (parent company of THE HEYMAN HUSTLE): If you’re a paparazzo, leave James Gandolfini the fuck alone.

There you go. Now, you can go.

NOW LISTEN UP AND LISTEN UP GOOD.
YOU CLICK ON THE PHOTOS BELOW … CAPICHE? 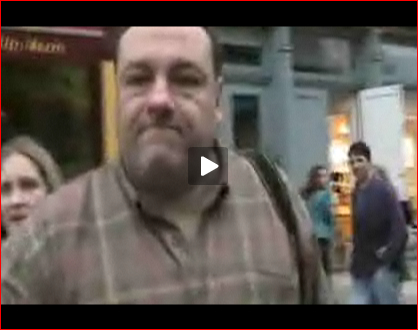 IN HONOR OF THE NEW YORK YANKEES WINNING THE WORLD SERIES,
WE’VE DECIDED TO BRAIN OUR TRAINED MONKEYS OVER THE HEAD
WITH AN OFFICIAL NY YANKEES 2009 BASEBALL BAT IF YOU DON’T LIKE
THE 15 STORIES THESE SIMIAN EMPLOYEES PICKED OUT JUST FOR YOU.

BE A SWEETHEART. BE A FREAKIN’ HUMANITARIAN.
SAVE A TRAINED MONKEY. PICK A PIC AND CLICK!