Upset at the US Open 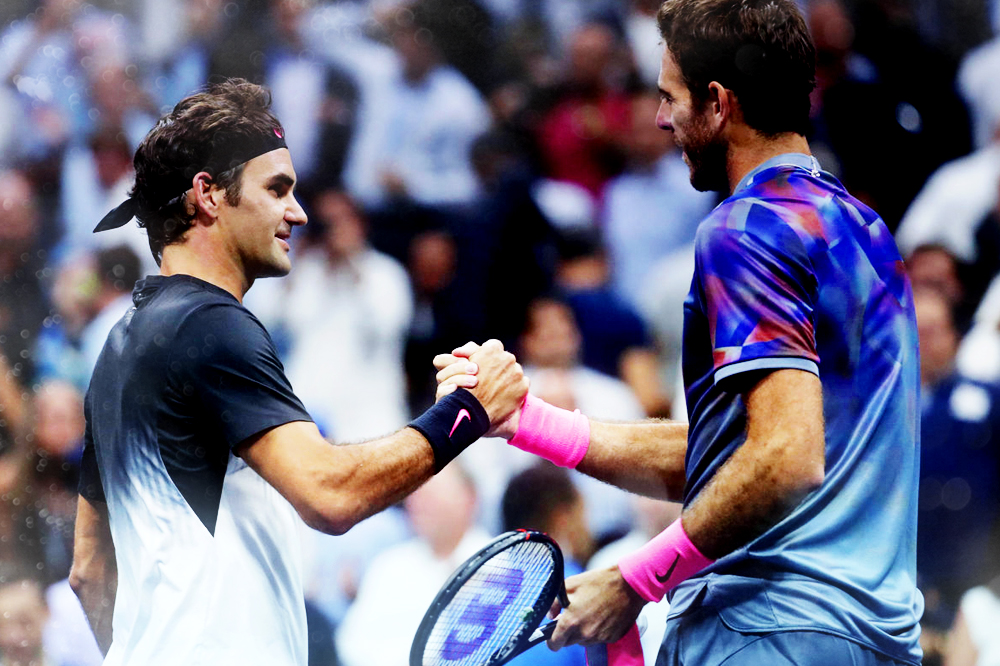 Those wanting Roger Federer vs Rafael Nadal at the US Open will have to wait another year.

Del Potro’s stinging serve, marvelous passing shots and piercing forehand were too much for Federer as the 6-foot-6 baseliner knocked off the legendary champion in three hours and four sets … 7-5, 3-6, 7-6 (10-8), 6-4 … at Arthur Ashe Stadium.

“It should hurt and it does,’’ said Federer after his bid for a third Grand Slam title for 2017 and 20th overall ended.

“Of course it is a pity, but Juan Martin deserves it more,’’ Federer said. “I feel I have no place in the semis, and he will have a better chance to beat Rafa, to be honest. The way I played or [am] playing right now, it’s not good enough in my opinion to win this tournament.”

In 2009, Federer’s Flushing Meadows nemesis sent him into an extended US Open tailspin. Del Potro rallied from 1-2 in sets to dethrone the Swiss Maestro, who had won five straight Open titles at the time. Federer hasn’t won here since, and he still will have to wait another year to face Nadal at Flushing Meadows.

This match wasn’t as close only because the 24th seed staved off four set points in the third-set tiebreaker to eke it out 10-8. It’s hard to imagine Federer in prime condition would have squandered the tiebreaker.

Federer had skipped the Cincinnati tune-up because of a back injury, admitting his “preparation’’ for the Open wasn’t ideal.

“I was looking for throughout the event if it was going to get better, my back,’’ Federer said. “Otherwise I wouldn’t enter the tournament if I knew that the back was going to get worse. But did it take away something from my overall performance? Maybe not on the night, but leading into the night, I just think it slowed down my rhythm. I was never really able to turn it on completely. I never felt like I got to the great level I can play at.’’

Earlier, Nadal routed 19-year-old Russian Andrey Rublev in a 6-1, 6-2, 6-2 quarterfinal bloodbath. Coming in as the No. 1 seed, Nadal made his sixth US Open semifinal but he gets Del Potro on Friday, not Federer.

“I played my best,’’ Del Potro said. “I did everything well. I hit my forehand as hard as I can. It’s my favorite tournament, my favorite city to play tennis.”

During his post-match interview, Nadal said of Federer: “It’s strange we never played here. I will be very excited to play that match. [It] is even more special when we are at the last part of our careers.’’

It won’t happen because the third set became one for the ages, with rollercoaster momentum swings.

In that third set, Del Potro got up 3-0 in games, up a break. But Federer stormed back, breaking Del Potro on a double fault. It sailed into the tiebreaker and Federer got up 6-4, double-set point, after Del Potro flew a forehand long. Del Potro came alive and Federer called it “the turning point.’’

At 8-8, Del Potro hit a forehand volley winner to bring up his own set point. Then Federer chirped a backhand volley long and the place erupted as Del Potro grabbed a 2-1 lead in sets, smelling blood.

In the fourth set, Del Potro got his break at 2-2, with Federer bashing an overhead into the net and then Del Potro smoking a backhand passer. With Del Potro serving for the match, a charging Federer got overanxious and pounded a forehand volley that nearly hit the back wall to set up match point.

Then Del Potro took a short ball, belted a forehand winner and raised his arms to the sky. Soon after, Federer said Del Potro “fought like a lion’’ and admitted he was “tired’’ and “needs a rest.’’

We’re HustleTweeting about the US Open, and you’re welcome to join the conversation by following the Hustle on Twitter HERE or by hitting LIKE on our hyper-interactive Facebook page HERE!