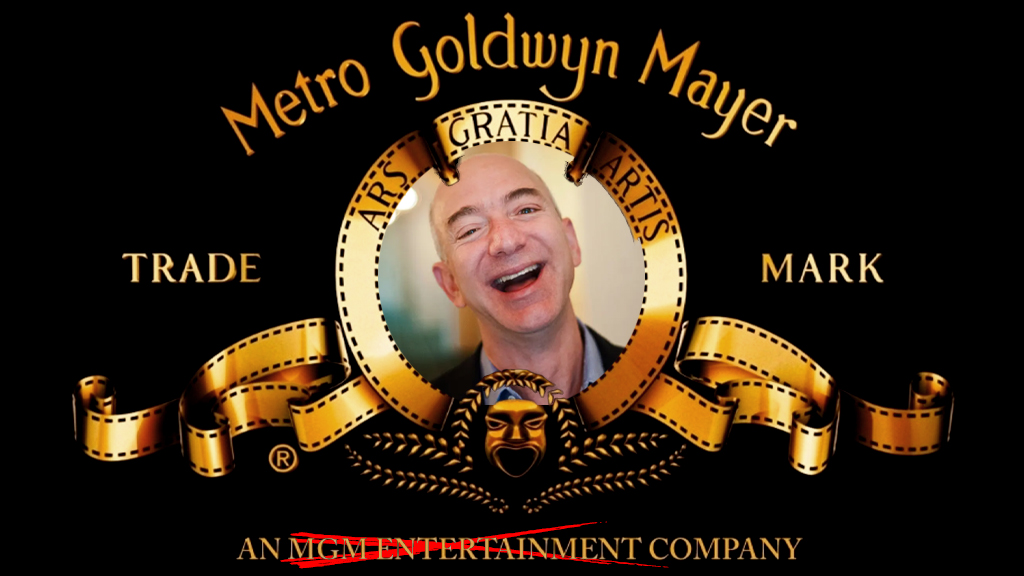 Amazon‘s purchase of MGM is official, and now the world awaits to see what Jeff Bezos will do with all that content. Except maybe, just maybe, Amazon didn’t purchase MGM for the content itself.

According to a fascinating report by Protocol:

Amazon has officially closed the acquisition of MGM, it announced Thursday morning, following an approval by EU regulators. Amazon first announced its intention to buy MGM for $8.45 billion in May, and EU regulators now decided that the deal doesn’t violate antitrust regulations because “MGM’s content cannot be considered as must-have,” according to Variety.

Ouch, that hurts, but it also helps to put the acquisition into context. Sure, acquiring MGM will help Amazon produce more exclusive content for Prime Video, and specifically could help the ecommerce giant get access to high-profile movies in order to better compete with Netflix and Disney+. But at least in the near term, it may actually have a bigger impact on something that is only loosely related to Prime: Amazon’s $31 billion advertising business.

MGM is home to a couple of massive film franchises, including Rocky and James Bond, which it co-owns with Eon Productions. Some of the studio’s other recent high-profile movies include “House of Gucci,” “Licorice Pizza” and “Cyrano.”

Amazon’s approach to movies has been a lot less disruptive than Netflix’s: Amazon Studios regularly releases films in theaters first before they stream to Prime subscribers.

On the TV front, MGM has worked with a number of Amazon’s competitors: “The Handmaid’s Tale” streams on Hulu, “Fargo” is a key FX property and “Vikings: Valhalla” is currently in Netflix’s Top 10.

It’s fair to assume that MGM’s TV efforts will eventually shift focus to bolster Prime, but this is likely going to be a years-long process, similar to the slow unwinding of Disney’s partnership with Netflix and NBCUniversal’s support of Hulu’s library.

Amazon said last year that MGM “complements the work of Amazon Studios,” suggesting that the studio will continue to operate as a separate brand and entity. In other words: It’s much more than a Prime content mill.

MGM’s huge catalog will have a bigger near-term impact. The studio owns 4,000 films and 17,000 TV show episodes; Amazon has said that it plans to “help preserve MGM’s heritage and catalog of films, and provide customers with greater access to these existing works.”

Some of the MGM movies and shows that haven’t been available on subscription services, including recent Bond titles, are likely going to find their way to Prime.

It’s safe to assume, though, that a good chunk of this catalog will also pop up on Amazon’s free, ad-supported streaming service, IMDb TV, sooner or later.

Advertising has become a massive business for Amazon, in part because of the fees the company charges sellers for sponsored listings on Amazon.com.

However, the company’s video ad business has been growing as well: A year ago, Amazon told Upfront buyers that it was now streaming ads to 120 million viewers a month. Expect even bigger numbers when Amazon returns to the Upfronts this year.

IMDb TV has been a key part of Amazon’s video ad strategy. As a free service, it allows the company to stream content to and make money from people who don’t pay for Prime.

But Amazon also seems perfectly content using IMDb TV as a vehicle to stream ads to Prime subscribers as well, setting it apart from the way Disney and others approach advertising in a subscription video context. Instead of providing a cheaper tier to customers willing to watch ads, Amazon simply presents IMDb TV as a free add-on.

Want to watch “Mad Men,” “24” or “Lost”? Then just deal with the ads, no matter whether you pay for free shipping or not.

Amazon does have big plans for IMDb TV. Not only is the service streaming exclusive shows, including a “Bosch” spin-off, but there have also been persistent rumors that it is getting a new name to appeal to an even wider audience.

Amazon has been experimenting with different brands abroad. In India, for instance, the company has been streaming ad-supported video with a service called miniTV, which is available through the company’s mobile shopping app.

Amazon applied for a U.S. trademark for miniTV in October.
The company also recently renewed a trademark application for Fireview, which could be another contender.

It’s even conceivable that Amazon might use one of MGM’s brands for an IMDb TV relaunch. Free Epix, anyone?

Whatever the brand ends up being, one thing is for certain: Amazon’s ad-supported video efforts have been getting a lot less attention than its Prime Video efforts. With the MGM deal about to close, that could be changing soon.

We’re HustleTweeting about Amazon’s Purchase of MGM, and you’re more than welcome to join the conversation on the Hustle Twitter HERE … on our ridiculously sensational Instagram HERE … or on our Facebook page HERE!