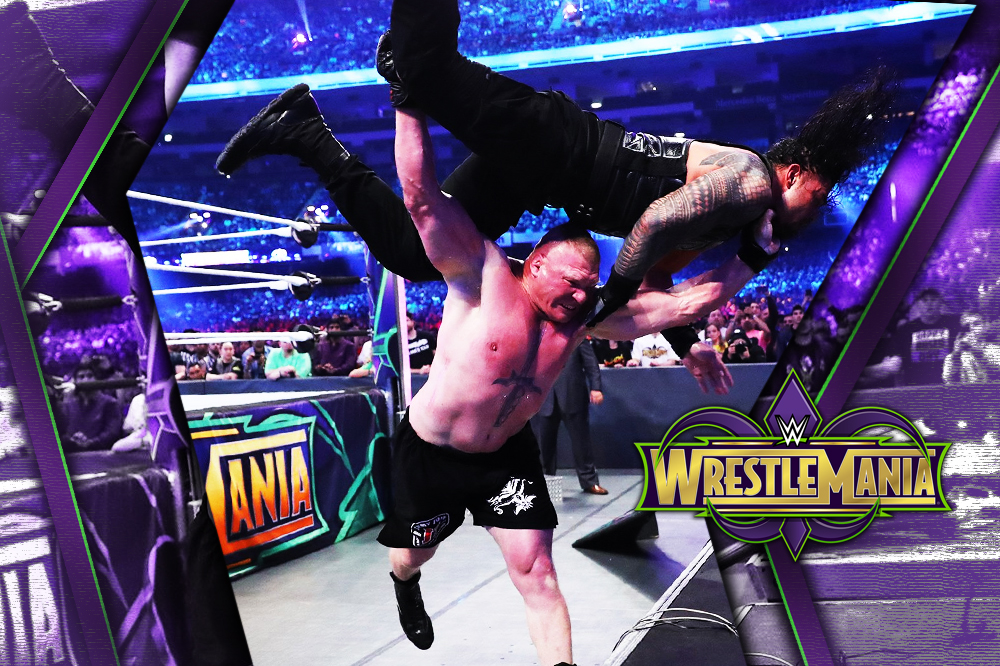 WWE Universal Champion Brock Lesnar (along with his Advocate, our boss Paul Heyman) stepped into the ring for the main event of WrestleMania 34 with everyone convinced this would be Roman Reigns‘ night. It ended up being a declarative statement by The Beast Incarnate, perhaps like never before. According to WWE.com:

Roman Reigns walked into Suplex City at WrestleMania 34, but he didn’t walk out.

In fact, the gory, motionless mess that Brock Lesnar left in the middle of the ring could only be charitably described as Roman Reigns. If anything, it was a husk of the proud challenger who had promised to change the culture of Monday Night Raw by taking the Universal Title from the “part-time” goliath who had claimed it as his crown jewel. Instead, Roman’s return trip to Suplex City ended much as the first one had — with disaster and disappointment.

Reigns’ righteous march from the Elimination Chamber to WrestleMania seemed to be the stuff of destiny — the specter of his WrestleMania 31 shortcoming still lingered over The Big Dog’s ascent, and he had grown vocally agitated over Lesnar lording his privilege over the rest of the Raw Superstars. Add onto the fact that Lesnar and his advocate Paul Heyman promised that The Beast would leave WWE if he was not champion, and it was looking like the best chance Reigns had yet to seize control of WWE’s destiny.

No one can say he didn’t rise to the occasion. Reigns was subjected to no less than five F-5’s (including one through the German announce table), six German suplexes and five belly-to-belly suplexes (one on top of another table), and he managed to kick out every single time The Beast Incarnate went to make the cover. The Big Dog gave as good as he got, too, hitting Lesnar with a handful of Spears and Superman Punches, not to mention some heavy punches to the head that had Lesnar swelling up just seconds into the contest.

It became clear that the longer Reigns held on, the more Lesnar would have to resort to some truly gruesome tactics to put his challenger away. It also became clear he had no issue doing so. He took off his gloves and busted Reigns open with elbows to the forehead. Rather than lead to a TKO ruling like when Brock did the same thing to Randy Orton at SummerSlam 2016, it only kicked Reigns into higher gear. The Big Dog, energized by the agony, blasted Brock with another pair of Spears, only for Lesnar to kick out and hit a sixth F-5 that finally put Reigns down for three.

Wherever he does go, Brock Lesnar will likely be there. If nothing else, WrestleMania 34 made it clear he’s not going away anytime soon.

We’re HustleTweeting about WWE WrestleMania, and you’re more than welcome to join the conversation on the Hustle Twitter HERE and also on our hyper-interactive Facebook page HERE!