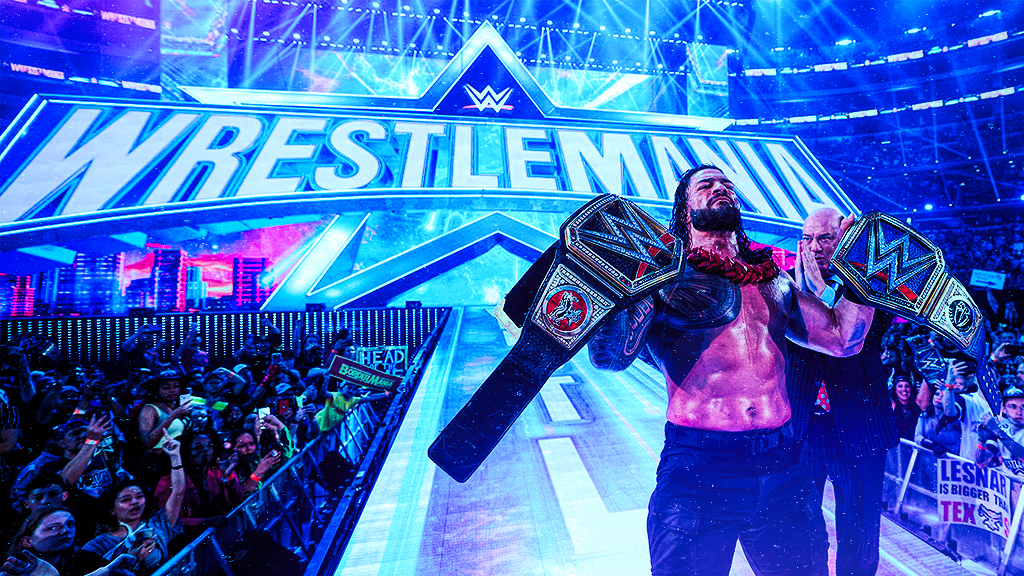 History was indeed made at AT&T Stadium in Dallas, Texas, as The Tribal Chief Roman Reigns (along with our boss, his #SpecialCounsel Paul Heyman) defeated Brock Lesnar to unify the WWE and Universal Championships in what was billed as the Biggest WrestleMania Match of All Time!

In his sixth WrestleMania main event, on day 581 of his record-setting Universal Title reign, Roman Reigns fulfilled his quest to be acknowledged as the Undisputed WWE Universal Champion.

The Tribal Chief topped WWE Champion Brock Lesnar in a Winner Take All clash that more than lived up to its billing as The Biggest WrestleMania Match of All-Time. In victory, Reigns not only scored redemption against a career-defining foe and closed the door on arguably the greatest WrestleMania rivalry in history, but he altered the landscape in WWE, unifying the top two prizes in sports-entertainment.

The fight that preceded Reigns’ historic accomplishment was nothing less than a gritty spectacle.

After declaring for weeks that he’d be out for Reigns’ blood in Dallas, Lesnar removed his gloves at the sound of the opening bell, underscoring his ill intent. The Beast Incarnate then dominated the early goings, delivering suplex after suplex until Reigns’ Special Counsel got involved. Paul Heyman cowered from Lesnar at ringside, and The Tribal Chief recovered enough to lock Lesnar in his crosshairs and Spear him through the barricade, leaving the WWE Champion in a heap.

The Head of the Table punctuated his attack with another Spear and two Superman Punches, none of which kept Lesnar down for the count. The Conqueror countered a third Superman Punch with a German suplex, then three more. The big hits kept coming — Reigns landed another Superman Punch, Lesnar hit an F-5 — but no matter the artillery, neither Superstar stayed down for long.

The referee later wound up sandwiched between Lesnar and the turnbuckles when Reigns fired off an especially hard-hitting tackle into the corner. With the official momentarily indisposed, The Head of the Table low-blowed Lesnar and cheap-shotted him with the Universal Title in a scene reminiscent of the closing moments of their clash at WWE Crown Jewel. Still, Lesnar escaped the pin once the official came to.

Mustering every ounce of energy he had left, Lesnar reversed another Spear into a Kimura Lock, but Heyman, operating outside the ref’s field of vision, pushed the bottom rope into Reigns’ hand, forcing Lesnar to relinquish the hold. Lesnar then positioned Reigns for an F-5, but the Universal Champion broke free and gutted The Beast with one more Spear, this one match-ending.

To stand alone atop the WWE mountain is a life’s goal for most Superstars, but for Reigns, notching a win over Lesnar at WrestleMania represents nothing short of vindication, reversing a pair of losses that have haunted Reigns. As Reigns walked up the ramp with both titles draped over his shoulders, just as Heyman had prognosticated, The Head of the Table left the WWE Universe no choice but to acknowledge him.

We’re HustleTweeting about Roman Reigns… and you’re more than welcome to join the conversation on the Hustle Twitter HERE … on our ridiculously sensational Instagram HERE … or on our Facebook page HERE!