WWE Network's Bring It To The Table Debuts, and Paul Heyman Makes the Ultimate Statement About Conor McGregor 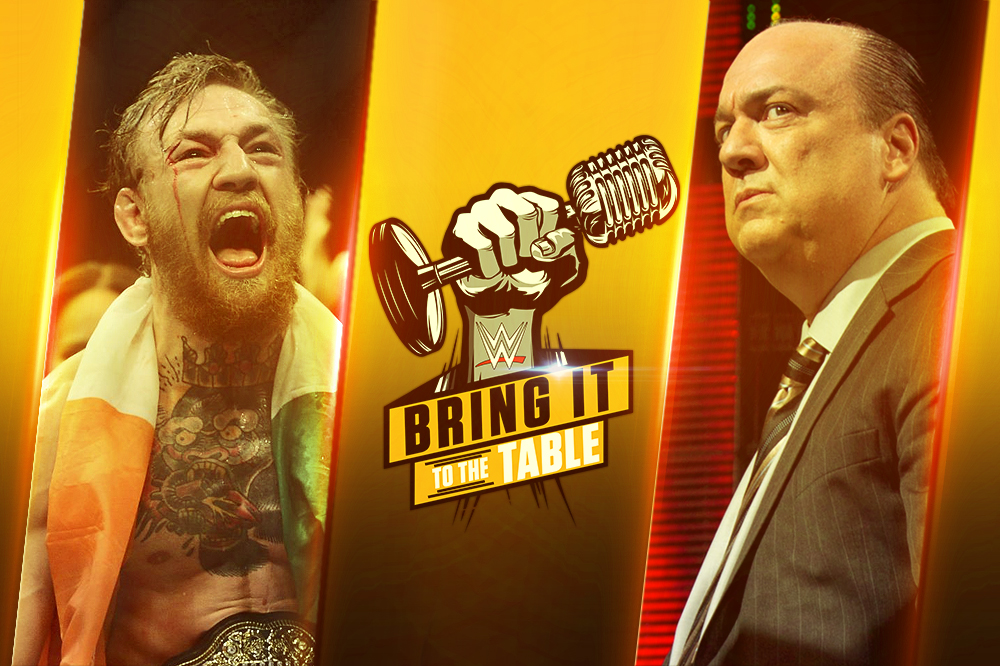 WWE Network debuted the very first episode of Bring It To The Table last night, with Peter Rosenberg presenting the fans’ point of view to “insider” Paul Heyman and “from the locker room perspective,” former WWE Champion JBL. During the show, the subject of UFC’s Conor McGregor in WWE came up, and our boss made headlines.

According to Fox Sports:

If Conor McGregor ever decides to make the jump from mixed martial arts to professional wrestling, he’s got the best promo man in the history of the business on his side.

Paul Heyman — best known as the mouthpiece for former UFC champion and WWE superstar Brock Lesnar — loves the idea of McGregor taking a run at professional wrestling at some point in the future.

“It’d be great if he was. He’s a main line box office attraction. He’s a headline news grabber. I think it’d be great for WWE and I think it would be even better for Conor McGregor,” Heyman said on “Bring It to the Table” on the WWE Network on Monday.

Rumors have swirled for months that McGregor might dabble in WWE after he riled up the entire roster with a message on his Twitter account following some comments made about Lesnar earlier this year while promoting his rematch with Nate Diaz at UFC 202.

Heyman couldn’t help but laugh when that message was brought up, especially considering the reaction McGregor received from many of the top stars on the WWE roster.

“Suckers. Hook line and sink,” Heyman said about the reaction to McGregor.

Heyman says watching WWE superstars calling out McGregor on Twitter is just proof of the kind of star power he attracts by sending out a lone message before the internet explodes with a million different reactions.

Even now with McGregor on the sidelines awaiting the birth of his first baby in May, Heyman notes that they are still talking about him on WWE programming, which just proves his drawing power once again.

WWE COO Triple H (real name Paul Levesque) was in attendance at McGregor’s last fight against Eddie Alvarez in November and even he admitted that the Irishman had huge crossover potential with the professional wrestling audience.

Of course, McGregor has no actual background in professional wrestling but his name alone would attract a massive audience to any WWE show where he would appear. Even McGregor’s manager said that they’d be willing to entertain an offer if WWE came calling.

It was just two years ago when fellow UFC star Ronda Rousey made a brief appearance at WrestleMania and she received a huge amount of attention for a two-minute segment in the ring alongside “The Rock” Dwayne Johnson, Triple H and Stephanie McMahon.

Considering McGregor’s star power as the biggest draw in combat sports today, he could probably attract an even larger audience than Rousey if he appeared on WWE programming.

Heyman loves the idea and even welcomes McGregor to join his stable of athletes.

“The smartest play for Conor McGregor is to become the very first Paul McHeyman guy,” Heyman said with a smile. “(WWE) that’s where I am right now. I’m not going to him, he’s going to have to come to me.”

We’re HustleTweeting about Paul Heyman’s comments on Conor McGregor and also on Bring It To The Table, and you’re more than welcome to join the conversation on the Hustle Twitter HERE and also on our hyper-interactive Facebook page HERE!