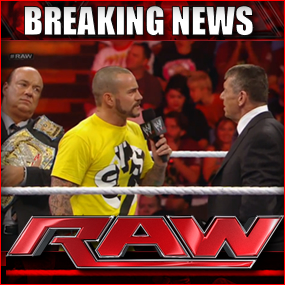 Photos and Video of CM Punk’s shocking slap across the face of the WWE Chairman … and Vince McMahon’s even-more-shocking reaction!

The situation took a dramatic turn when Punk slapped McMahon right across the face. The entire volatile situation was reported on WWE.com:

So what is the state of WWE? Following Mr. McMahon’s address, state of flux would be appropriate to say the least. What started as a good-natured speech to the WWE Universe about what makes WWE great devolved into animosity and, finally, physicality after WWE Champion CM Punk decided to go a few verbal rounds with his former favorite “pipe bomb” target.

It was The Chairman’s implication that WWE was about the best battling the best that brought Punk forth, sporting a new T-shirt and the same furious attitude that led to the “pipe bomb” itself. The champion, furious that Mr. McMahon dared speak of “the best” in the company without mentioning his name, took The Chairman to task for his supposedly underappreciative attitude, for attempting to vilify him while he carried the standard of WWE around his waist. “I’m the best you have!” Punk roared in Mr. McMahon’s face, but The Chairman would not be moved. He attempted to take Punk down a notch, comparing him unfavorably to legends like Bret Hart and “Stone Cold” Steve Austin.

Instead of humbling Punk, however, the opposite occurred. Incensed by Mr. McMahon’s comments, Punk vilified The Rattlesnake and finally got to his point: that it was a “slap in the face” when Mr. McMahon failed to mention Punk as one of his best Superstars. “You’ve been slapping me in the face for years,” The Second City Saint seethed, before rearing back and open-palm slapping The Chairman across his face. With The Boss prone on the mat, Punk knelt down and delivered the kicker: “And now that’s a slap in your face.”

While The Second City Saint preened his way back up the ramp, The Chairman got to his feet and got to business: He should fire Punk, but wouldn’t … provided the WWE Champion met him one-on-one in the ring later that night. And by the time the night is over, The Boss vowed, CM Punk would learn something about respect.

At the top of the ramp, Paul Heyman attempted to dissuade his “guy” from taking The Boss’s bait, but The Voice of the Voiceless would have none of it. “We have him right where we want him,” said Punk.

Of course, we’re HustleTweeting about WWE Champion CM Punk, our own Hustler De Tuti Hustlers Paul Heyman, Vince McMahon, Monday Night Raw, and the Slap Felt ‘Round The World, so please don’t be shy. Join the conversation by following THE HEYMAN HUSTLE on Twitter HERE or write to us directly at hustleoncrave@gmail.com  Hey, have you checked out the Hustle’s Ultra High Quality You Tube Channel, with exclusive videos featuring OUR WORLD EXCLUSIVE WITH MIKE TYSON … BROCK LESNAR’S “HERE COMES THE PAIN” … ICE-T AND COCO’s SEX SECRETS … TEEN SENSATION TAYLOR MOMSEN … UFC BAD BOY NICK DIAZ … THE WALKING RIOT MISSY HYATT if you’re not subscribing, you’re missing something … and by the ways cheapos, it’s FREE! Yes, absolutely 100 percent FREE! What are you waiting for? Check it out HERE!

CLICK ON THE PICS BELOW TO SEE THE ENTIRE OFFICIAL WWE
GALLERY COVERING CM PUNK’s SLAP ACROSS THE FACE OF VINCE McMAHON! 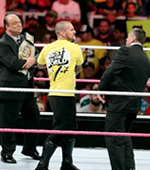 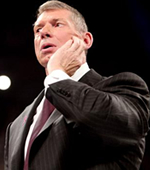