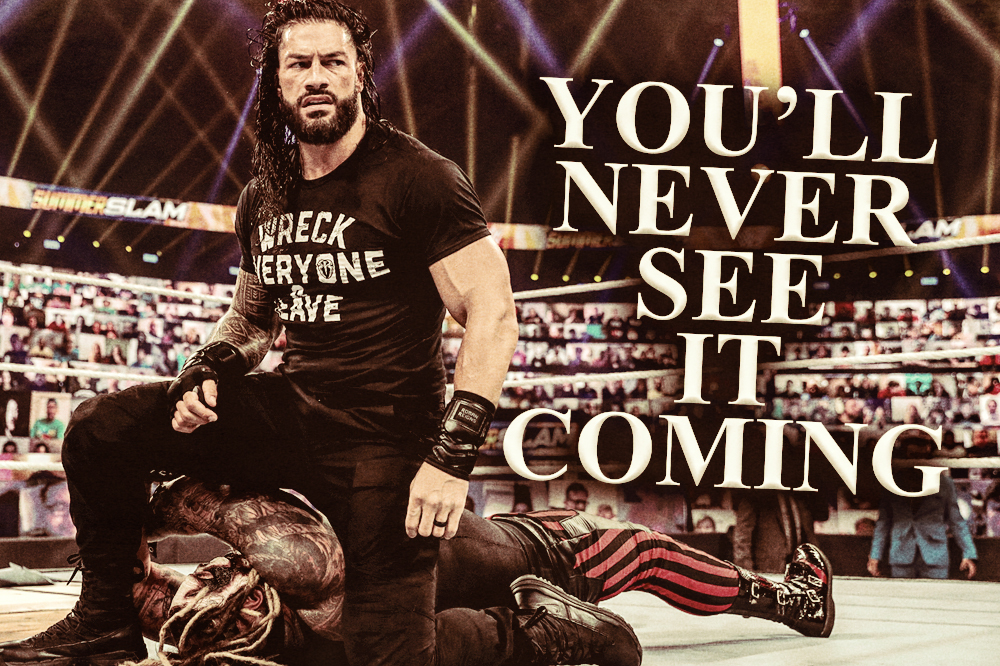 The slogan for this year’s WWE SummerSlam was You’ll Never See It Coming. And they were right. Truth in advertising.

The Big Dog Roman Reigns shocked the WWE Universe with an impactful return, laying a vicious beating on Braun Strowman and The Fiend Bray Wyatt just moments after The Fiend defeated Strowman for the Universal Championship.

In a matchup between two of the most destructive forces in WWE history, “The Fiend” Bray Wyatt prevailed over “The Monster” Braun Strowman to become the new Universal Champion.

As expected, this Falls Count Anywhere Match resembled nothing like a traditional wrestling bout, instead looking more like a demolition derby. The action spilled outside the ring in the opening minutes as “The Fiend” showcased his inhuman power with a chokeslam to the larger Strowman before delivering multiple neck-snapping maneuvers.

The melee only picked up from there, as Strowman answered with a chokeslam of his own on the announce table after the rivals crashed through a portion of the ringside barricade. Wyatt used a toolbox stored under the ring as a devastating weapon against his former Wyatt Family ally.

They soon brawled to the backstage area, demolishing everything in sight before Wyatt hit a vicious Sister Abigail on the bare floor.

Returning to the ring, Strowman used a box cutter to dismantle the canvas, exposing the wooden boards underneath the mat. But it would lead to his own downfall, as Wyatt delivered two Sister Abigails on the exposed wood, putting away “The Monster” to reclaim The Universal Title.

As “The Fiend” rose to his feet, he was suddenly met with a thunderous Spear and a barrage of right hands from none other than Roman Reigns! The Big Dog followed up by Spearing Strowman and drilling “The Monster” with several unrelenting steel chair strikes.

Still unsatisfied, Roman leveled Wyatt with another Spear and hoisted the Universal Championship above his head as SummerSlam concluded in shocking fashion.