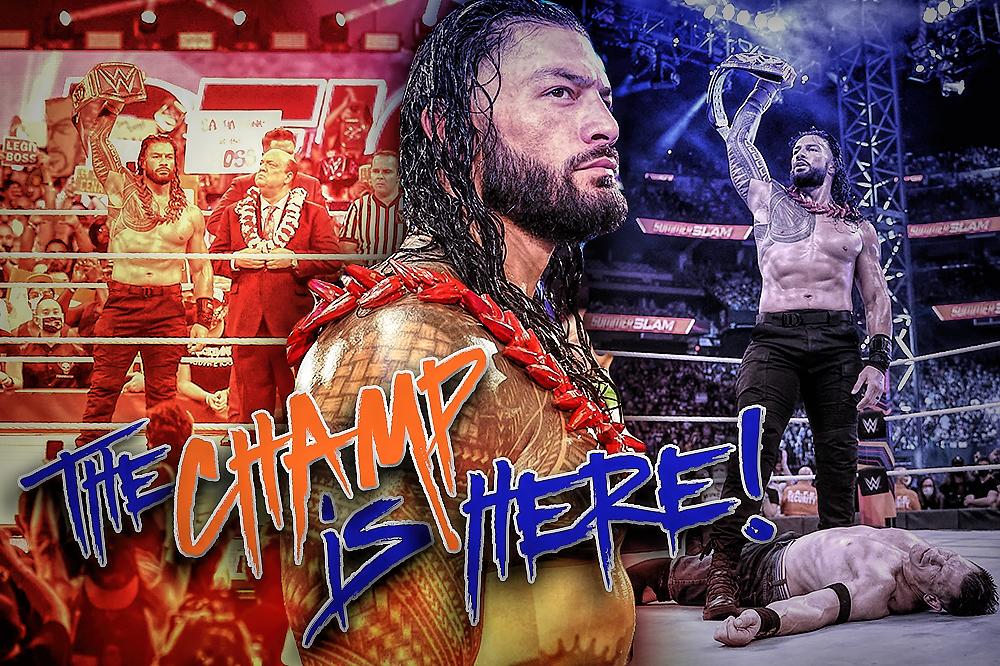 WWE Universal Heavyweight Champion Roman Reigns (along with our boss, his #SpecialCounsel Paul Heyman) dominated John Cena, smashing the 16x champ in shocking fashion in the main event of WWE SummerSlam, only to be confronted by a blast from the past … Reigns’ longtime nemesis, and Heyman’s former client BROCK LESNAR!

LAS VEGAS — Roman Reigns battled through three of John Cena’s Attitude Adjustments to extend his dominant Universal Championship reign, but before he could celebrate, old rival Brock Lesnar returned for the first time since WrestleMania 36 in a jaw-dropping main event to SummerSlam 2021.

Cena has been a fixture at the top of sports-entertainment for nearly two decades. But this year belonged to Universal Champion Reigns, and he wanted to prove to Cena that his time was now. Reigns even raised the stakes of the title clash on Friday, saying “Either I’m leaving that stadium as the Universal Champion or I’m leaving WWE.”

The Superstars toyed with each other to start the matchup, with Cena repeatedly trying to catch Reigns by surprise with a roll-up. At first, Reigns would smirk. But with each attempt, he grew more and more insulted. With every kickout, Reigns would look at his counsel Paul Heyman, bemused that Cena had the nerve to try to pin him.

Then Reigns turned it on, showing Cena why he’s at the top of his game. He began to punish the challenger, bouncing him off the steel steps multiple times before grabbing his Universal Title to pose for the crowd. When the action returned to the ring, Cena once again attempted a rollup, causing Reigns to laugh, “You can’t roll me up. You ain’t gonna win like this.”

Cena seemed to have found a spark by lining up for an Attitude Adjustment, but Reigns shrugged him off. The Universal Champion talked trash to Cena and all of Hollywood as the beatdown continued, but Cena never gave up, mounting a comeback after escaping from a sleeper hold. Cena connected with a Five Knuckle Shuffle and an Attitude Adjustment, but Reigns miraculously kicked out. Even Heyman was bewildered, mouthing, “Oh my God.”

A second AA through the announce table pushed Reigns to the brink again, but the Universal Champion improbably kicked out, causing a desperate Cena to try for a top-rope leg drop, which Reigns countered with a powerbomb.

After delivering another Superman Punch, Reigns declared the match was over and rushed for a Spear, only to come up empty and crash into the ring post. Cena went for broke with a top-rope Attitude Adjustment, but Reigns again kicked out to ensure Cena’s 17th World Title win would not come at his expense.

Cena then tried to embarrass Reigns, saying “Your time is up; my time is now,” and mocking the champion’s signature yell. But he earned a third Superman Punch for his efforts followed by a Spear that spelled the end of Cena.

The celebration was short-lived, though, as the signature riff of Brock Lesnar’s theme hit Allegiant Stadium. Heyman fell to his knees as his longtime client marched to the ring with his eyes set squarely on the blue-strapped title. His first time in a WWE ring in nearly 17 months, Lesnar was ready to throw hands against his longtime rival, but Reigns said not tonight.

The Champ is here, and he sits at the Head of the Table. But a potential new challenger awaits.