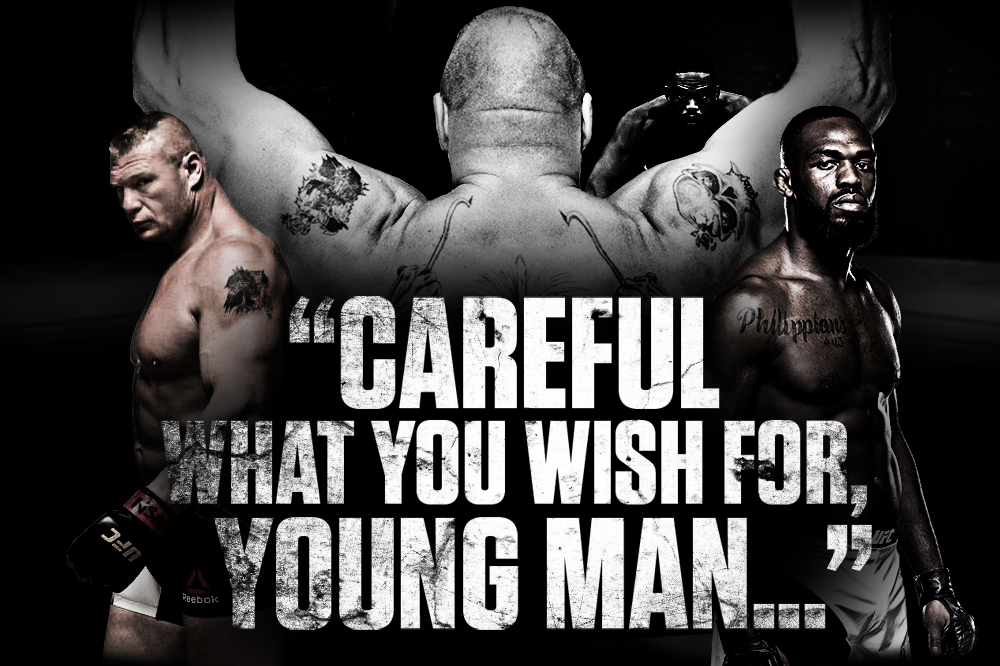 Well, things are escalating at a rapid pace.

When Jon Jones reclaimed the UFC Light Heavyweight Title and called out Brock Lesnar, did anyone really think Lesnar would resist the temptation to respond? Greg Meacham of The Associated Press filed the following report:

Jon Jones had barely reclaimed his UFC title when he called out Brock Lesnar to be his next opponent.

And Lesnar was listening.

Right after Jones stopped Daniel Cormier in the third round at UFC 214 on Saturday, the light heavyweight champion reignited his growing rivalry with Lesnar, the former UFC heavyweight champ.

“Brock Lesnar, if you want to know what it feels like to get your ass kicked by a guy who weighs 40 pounds less than you, meet me in the octagon,” Jones said on the pay-per-view broadcast.

The Associated Press reached Lesnar shortly after he watched the championship fight and then heard Jones call him out.

“Be careful what you wish for, young man,” Lesnar replied.

A heavyweight superfight between Jones and Lesnar would be one of the biggest events in UFC history. Lesnar is an extraordinary pay-per-view draw as likely the most popular fighter in mixed martial arts, while Jones’ victory over Cormier is expected to put him back atop most pound-for-pound lists as the world’s best fighter.

Jones expanded on his desire for a fight with Lesnar during the news conference following his victory over Cormier.

“We’re serious about it, and it would be great for the MMA world,” Jones said. “It would bring more of the general public to mixed martial arts, and that’s what we need. We need to expand our sport, so why not be the guy to take part in that?”

Jones said his manager loves the idea of the enormous payday that would result from the fight, while his teammates at Greg Jackson’s gym in New Mexico are eager to watch him.

Later, Jones expressed his confidence: “I think Brock has a limited game. I think it’s a winnable fight.”

Lesnar returned to MMA last year with a victory, but he is under contract to the WWE as a professional wrestler until next spring. Yet Lesnar clearly is at least considering a return to the sport in which he won a UFC title in just his fourth professional fight.

Talk of a superfight heated up abruptly this week when Jones and Lesnar traded verbal jabs. After Jones said he doubted Lesnar would ever accept a fight with him, Lesnar told the AP that he would meet Jones “anytime, anywhere.”

UFC President Dana White was in the cage when Jones called out Lesnar, and the promotion is aware of the growing buzz surrounding the matchup. White is also aware of the obstacles in its way, including the remainder of Lesnar’s suspension for failing a doping test last year.

“It’s fun to talk about, but the reality of it happening anytime soon, it’s not a reality,” White said.

But it’s definitely a lucrative possibility for 2018 if Lesnar decides to resume training for MMA. Jones is the light heavyweight champion, but has long contemplated a move up to heavyweight — and his post-fight comments make it clear that he’s interested.

When Jones was asked whether he would consider fighting heavyweights other than Lesnar, including champion Stipe Miocic, Jones made it clear he only wants a heavyweight superfight with the biggest star in the sport.

Lesnar has fought just once since 2011. He beat Mark Hunt at UFC 200 in a unanimous decision that was changed to a no-contest after the failed test.

He received a one-year suspension from the Nevada Athletic Commission, but could return to MMA after completing the final months of the ban.