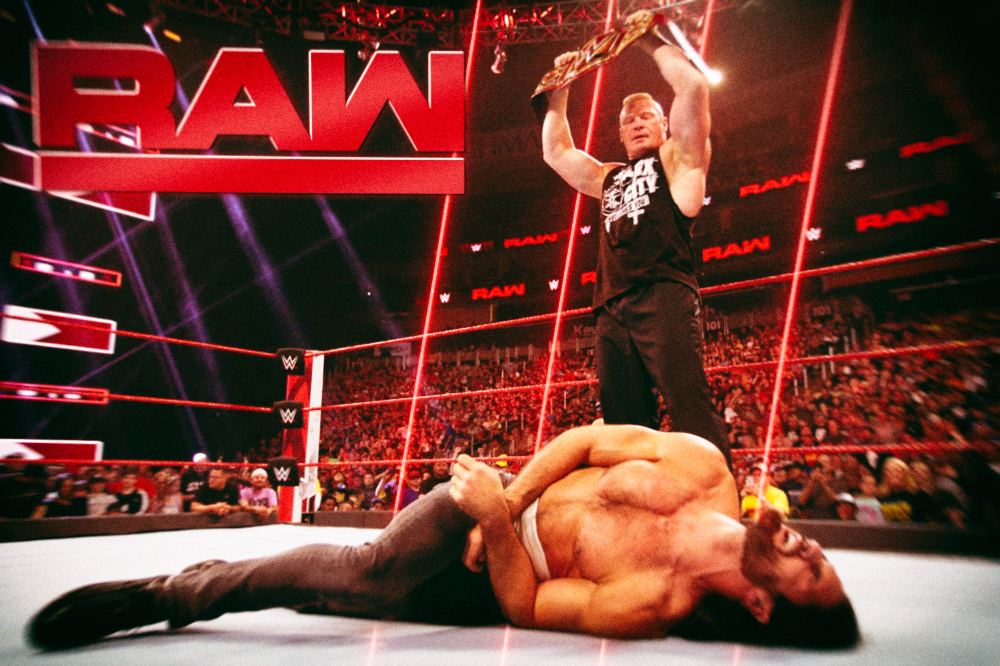 WWE Universal Heavyweight Champion Brock Lesnar destroyed his SummerSlam challenger Seth Rollins last week on RAW! This week, Lesnar and his advocate (our boss) Paul Heyman appeared on RAW again, the final RAW before SummerSlam … and unfortunately so did Seth Rollins. According to WWE.com:

A few weeks ago, Seth Rollins was The Beastslayer; the Conqueror’s conqueror; the one man who had Brock Lesnar’s number. As of last week, however, Rollins wasn’t looking like much of a challenge to The Beast Incarnate, having been F-5’d into a pulp over the course of a beating so heinous that Paul Heyman begged his client to stop and admitted, seven days after the fact, that it bordered on criminal.

And yet, Rollins once again showed up to Raw with a chair in hand to try and gain some ground back before he challenges Lesnar for the Universal Title on Sunday. If it was a reminder that Rollins still possesses the heart of a champion, it was also a reminder that he seems to pose little threat to Lesnar in his current state: Against further protestation from Heyman, Lesnar easily swatted his challenger down by booting him in the injured ribs and administering an F-5 to conclude a beating that was mercifully shorter but no less terrible than the one he inflicted last week.

Despite all this, however, Rollins still grabbed the mic after the beatdown and vowed to make it to Toronto and face Lesnar for the championship in six days simply because it’s worth it to try. “This is all I am,” Rollins groaned after the attack as he struggled to his feet and walked off under his own power. He even threw in a guarantee that he’ll defeat Lesnar, a reminder that whether he has The Beast’s number or not, no amount of F-5’s will change who he is: undeterrable, unshakable, and brave to a fault.

We’re HustleTweeting about SummerSlam, and you’re welcome to join the conversation on the Hustle Twitter HERE and also on our hyper-interactive Facebook page HERE!