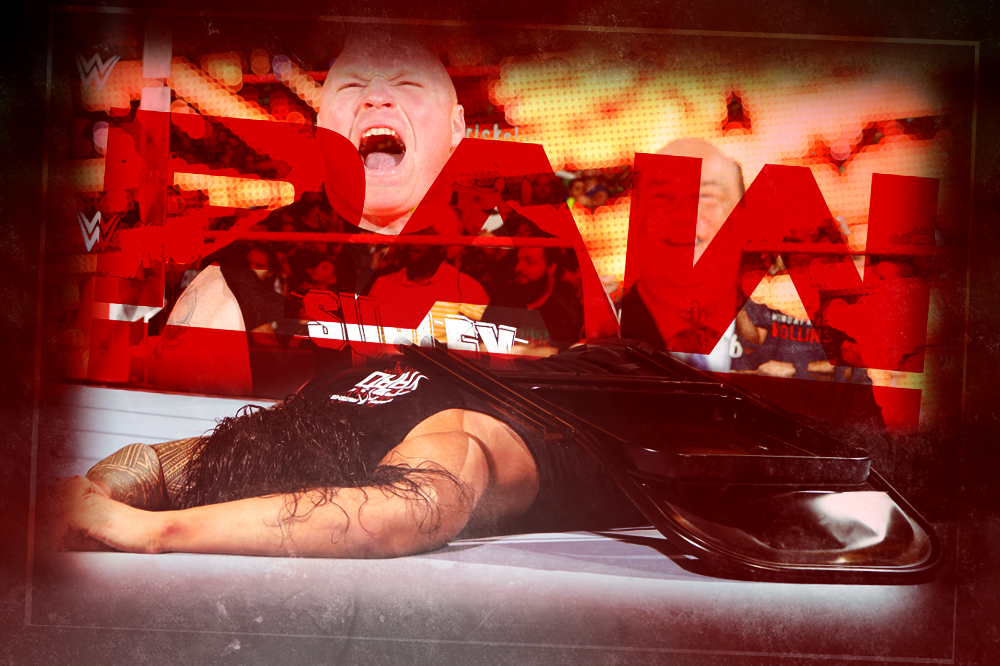 Our boss Paul Heyman had a lot to say about Roman Reigns. 13 days before Reigns challenges Brock Lesnar for the Universal Title at WrestleMania, the temporarily suspended Samoan Bad Ass was questionable for RAW as result of last week’s handcuffed beating at the hands of Brock Lesnar! So here we are, in Cleveland, Ohio … and things got even more heated! According to WWE.com:

For weeks, Roman Reigns has disparaged Universal Champion Brock Lesnar for not showing up to Raw when he was supposed to. Last week, Reigns received a beating for his troubles, and now just two weeks from WrestleMania, The Beast returned under a cloud of irony: Despite the lifting of his temporary suspension, Reigns was the one who was seemingly nowhere to be found.

That led to some savage gloating from Paul Heyman, who called Reigns’ manhood into question for failing to live up to his family’s fighting legacy. To Heyman’s surprise, however, Reigns appeared in the crowd, steel chair in hand and ready to throw down. Lesnar obliged, and while The Big Dog connected a few times with the chair, he was still too weakened from last week to put up much of a fight beyond that. Lesnar snatched Reigns out of the air when he attempted a Superman Punch off the steps and easily overpowered him, thanks in no small part to his use of the steel steps as an equalizer. After another series of hellacious chair swings to Reigns’ back, The Beast was seemingly done, though he returned for one final statement at the expense of his challenger: An F-5 atop the steel steps.