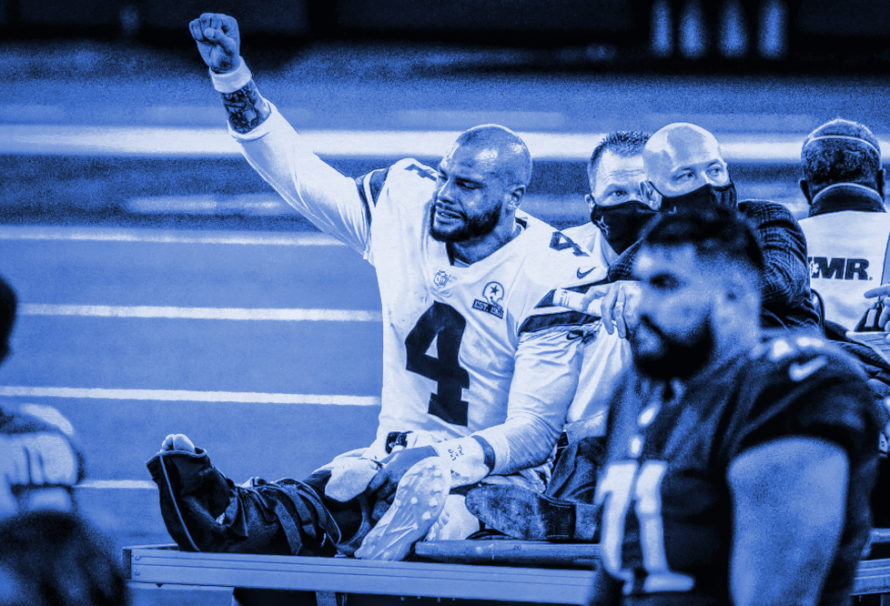 The Dallas Cowboys will be without the services of quarterback Dak Prescott for a while, as the NFL star suffered a compound right ankle fracture and dislocation suffered in the third quarter of the Cowboys‘ 37-34 victory over the Giants.

The Cowboys announced details on Prescott’s injury immediately following the game. The injury was splinted with a sterile dressing, and surgery will wash out the wound and fix the fracture.

Prescott landed awkwardly after getting tackled on a 9-yard run into the Giants‘ red zone. After being attended to by team medical and athletic training staff, Prescott was helped off the field on a medical cart. Teammates and coaches did their best to console him, and it needs to be noted that he did acknowledge the ovation from the crowd at AT&T Stadium.

Tied at 34-34, Dalton (9-of-11, 111 yards, one fumble) drove the offense 72 yards in the final 53 seconds. He completed consecutive passes to Michael Gallup for 57 yards to set up Greg Zuerlein‘s winning 34-yard field goal as time expired.

Dalton, a 10-year veteran and three-time Pro Bowler, signed a one-year deal in May to back up Prescott. He will take over as the starter moving forward.

“You absolutely hate it for Dak,” Dalton said. “The way that he was playing this year and everything he’s put into it, I hate to see that for him. It’s emotional. … It’s been a lot of fun to be around him ever since I got here, just to see how he works and how he prepares, and you can see just the way he was playing this year.”

A month into the season, Prescott was on pace to set the NFL single-season record for passing yards. In five starts he had 1,856 yards, 9 touchdowns and 4 interceptions.

“I feel terrible for him. He was having a tremendous year,” head coach Mike McCarthy said. “I have no doubt he will bounce back and this will be another chapter of his great story.”

We’re HustleTweeting about Dak Prescott, and you’re more than welcome to join the conversation on the Hustle Twitter HERE … on our ridiculously sensational Instagram HERE … or on our Facebook page HERE!