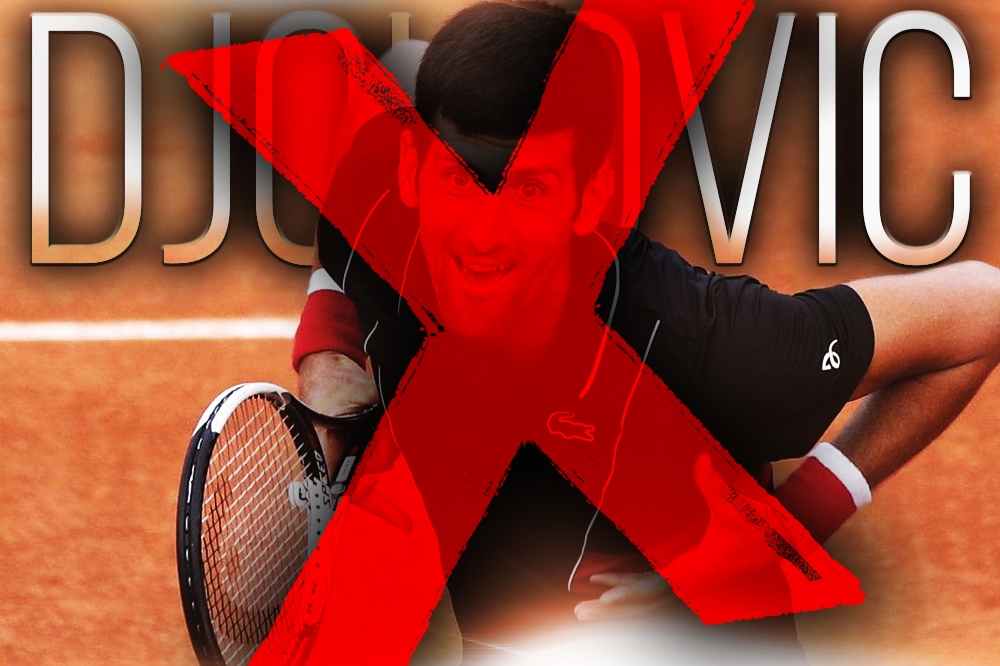 Marco Cecchinato, a 25-year-old Italian ranked No. 72 who had not won a Grand Slam singles match until arriving at the French Open this year, is in the semifinals after upsetting Novak Djokovic, 6-3, 7-6 (4), 1-6, 7-6 (11), on Tuesday. This was the biggest shocker so far at the French Open, and comes right after we just posted a story regarding Djokovic’s return to form this week!

It is one of the great Grand Slam Cinderella stories, and Cecchinato, who has a tattoo of the number 13, is clearly one who can see opportunity where others might see bad luck.

He has made the most of a brutal draw, knocking off three seeded players, and his unexpected run comes in the same clay-covered place where a few other charismatic outsiders have also emerged from fairly close to nowhere.

None fared better than Gustavo Kuerten, an elastic Brazilian known as Guga, who arrived at Roland Garros unseeded and largely unknown and proceeded to win the title in 1997.

“Marco is Guga again,” said Filip Dewulf, a former Belgian star, who lost to Kuerten in the semifinals that year after a surprise run of his own.

But Cecchinato, who will next face No. 7 seed Dominic Thiem, is unlikely to match Kuerten’s story line.

Thiem was too fresh and too good for No. 2 seed Alexander Zverev on Tuesday, ripping forehands and big serves, while Zverev grabbed at an injured left leg, winning the other quarterfinal in the bottom half of the draw, 6-4, 6-2, 6-1.

“And Nadal is in the top half,” Cecchinato reminded a reporter, referring to Rafael Nadal, the 10-time French Open champion who remains very much the man to beat and will face Diego Schwartzman in the quarterfinals on Wednesday.

Cecchinato, born and raised in the Sicilian city of Palermo, will always have Tuesday’s stirring victory over Djokovic, the 2016 French Open champion and former No. 1 who has been the second best clay-court player of this golden age in men’s tennis behind Nadal.

After it was over, Cédric Pioline, the former French star, started an on-court interview by reassuring Cecchinato, “You’re not dreaming.”

Cecchinato looked at him, with eyes already red from crying, and said, “Are you sure?”

A little more than two years ago, he was suspended by the Italian Tennis Federation for 18 months for match fixing. The ban was then reduced to 12 months by an independent tribunal and later overturned by the Italian Olympic Committee.

Cecchinato, who resumed competing in 2017, has repeatedly declined to discuss that part of his past here in Paris, saying he wanted to focus on “this moment in my life.”

But his legal battles are another reminder of the significance of the corruption issue. In April, an independent task force concluded that professional tennis needed reform to combat a “tsunami” of fixed matches at the sport’s lowest levels.

Cecchinato, ranked 143rd at the time of his suspension, will not have to play satellite events again anytime soon. His ranking will soar into the top 30, and he is expected to be seeded at Wimbledon despite playing just one tour-level match on grass.

“Is good for my opponent in Wimbledon,” Cecchinato said with a laugh.

But he is a force on red clay. Djokovic, 31, is not the player he was by any means, but he produced plenty of intense effort, spectacular defense and high-end shot making in Tuesday’s mood-swinging quarterfinal.

Seeded 20th after a season and a half of injuries and disappointing results, Djokovic arrived in Paris back on the upswing after rehiring his former coach Marian Vajda and pushing Nadal before losing in the semifinals of the Italian Open.

Cecchinato, who has practiced frequently with Djokovic in Monte Carlo, was perhaps less dazzled by Djokovic than other newcomers might have been.

Cecchinato played smart, often sparkling tennis on this overcast day, hitting drop-shot winners in bunches and bold, one-handed backhands down the line. He frequently caught Djokovic leaning or moving the wrong way. Most important, Cecchinato did all this in the critical phases of the match despite lacking any experience in high-stakes duel at this level.

“He didn’t seem to be under the impression of the big stadium or the big match,” Djokovic said. “He just held his nerves amazingly well in the important moments.”

Cecchinato won the four final points of the second-set tiebreaker, and then with the match seemingly headed for a fifth set, he capitalized on Djokovic’s lapses to fight back in the fourth set.

That set had started inauspiciously for Cecchinato as he was penalized a point for a code-of-conduct violation after leaving the court between sets without asking permission from the chair umpire, Carlos Ramos.

Djokovic, who was treated for shoulder and calf pain earlier in the match, jumped out to a 3-0 lead in the fourth set and later served for it at 5-3. But he blew a 30-0 lead by losing the next four points.

Cecchinato pushed the set into another tiebreaker, where he saved three set points and Djokovic saved three match points — the first at 5-6 with a lunging angled backhand volley winner.

The desire and fire, sometimes hard to locate in Djokovic’s tennis in the last 18 months, was undeniably there. But he is still not as reliable or confident a player as when he was dominating the game.

On his third set point, at 9-8, he moved forward in the court to strike what appeared to be a relatively routine midcourt forehand and, with the crowd already buzzing, mishit it so badly that it nearly reached the stands on the fly.

Djokovic dropped into a crouch, fingers to his lips as if to remind the crowd to be quiet, and shouted in frustration. His best chance to extend the match was over, and on Cecchinato’s fourth match point, Djokovic decided to serve and volley only to see a leaping, down-the-line backhand return soar out of his reach and land in the corner for a winner.

Though Djokovic sportingly crossed to the other side of the net to embrace Cecchinato, who had fallen to the clay in celebration, Djokovic was in a much darker mood when he came to his post-match news conference.

He insisted on sitting in a smaller, secondary interview room instead of the main one, and then kept most of his answers clipped, frequently waving his arms in frustration and sighing between brief answers.

When someone suggested that his recent results and fighting spirit on Tuesday showed that he was back, he answered: “I am back in the locker room. That’s where I’m back.”

Asked about his plans for the coming grass-court season, which includes Wimbledon, he answered, “I don’t know if I’m going to play on grass.”

But he was clear when asked why this loss seemed so difficult to accept.

“Any defeat is difficult in the Grand Slams, especially the one that, you know, came from months of buildup,” he said. “And I thought I had a great chance to get at least a step further, but it wasn’t to be.”

Instead, Cecchinato is the first Italian man to reach the semifinals at Roland Garros since Corrado Barazzutti in 1978. He is also the lowest-ranked man to get this far here since Andrei Medevev, who was No. 100 in 1999, when he lost in the final to Andre Agassi.

Cecchinato arrived on a hot streak after winning his first ATP Tour title, as a lucky loser, at the low-level event in Budapest. But he was 0-4 in Grand Slam play when the French Open began and nearly went 0-5 before defeating Marius Copil in a first-round marathon that stretched to 10-8 in the fifth set.

Martin Verkerk, a big, blond Dutchman with a flashy one-handed backhand of his own, also had not won a round in a Grand Slam tournament before reaching the final of the 2003 French Open.

Verkerk was a one-Slam wonder unlike Kuerten, who went on to reach No. 1 and win three French Open titles. Time and tournaments will tell what kind of wonder Cecchinato is, but there is clearly something about red clay and the Paris spring that turns outsiders into insiders.

At first, it seemed clear that the best story about an outsider named Marco this year was going to be the lucky loser Marco Trungelliti’s late-night drive back to Paris from Barcelona to get a shot to play in the French Open.

But that Marco has competition from the Marco who beat him in the second round, and Cecchinato has made his feel-very-good story last deep into the second week.

We’re HustleTweeting about the French Open, and you’re more than welcome to join the conversation on the Hustle Twitter HERE and also on our hyper-interactive Facebook page HERE!