StrikeForce Returns To Showtime Tonight with Henderson vs Sobral II 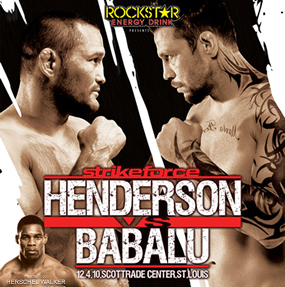 StrikeForce returns to Showtime tonight, and the main event promises to be quite interesting. Dan Henderson (25-8 MMA, 0-1 StrikeForce) takes on Renato "Babalu" Sobral (36-8 MMA, 2-1 SF) in a rematch over a decade in the making.

Henderson and Sobral fought in the 1999 Rings "King of Kings" tournament in Japan, where Henderson won via decision.

Waiting for the winner of this main event is Light Heavyweight Champion Rafael "Feijao" Cavalcante, who upset "King Mo" for the title. Strikeforce CEO Scott Coker has already stated the winner of the Henderson vs Sobral fight gets a title bout against Cavalcante.

Henderson is coming off a loss in his StrikeForce debut against Cesar Gracie black belt Jake Shields, who immediately jumped to UFC after the stunning upset. Henderson got tired after putting Shields down in the first round and was defeated by the relentless wrestling from Shields. Henderson has stated he encountered problems when he took pain medication for his back that prevented him from cutting weight. In what could only be considered a major bad move, Henderson cut most of the bulk last-minute and took off 19 pounds before the fight.

"I just didn’t have the energy I should have had," he admitted.

Sobral, of course, is coming off a victory over Ruthless Robbie Lawler.

Henderson has his own vision. "It’s no secret. I am going to look for a KO. I don’t care if he absorbs strikes well. I hit harder than the other guys."

"We are totally different fighters than we were 10 years ago," Sobral countered, "I’m happiest when I am in the cage and can share my passion with the crowd and TV audience."

"Strikeforce: Henderson vs. Babalu II" airs live on Showtime tonight at 10pm ET/PT from the Scottrade Center in St. Louis.

We’re HustleTweeting about Henderson vs Sobral II, and you’re more than welcome to join the conversation. Follow THE HEYMAN HUSTLE on Twitter HERE or write to us at hustleoncrave@gmail.com 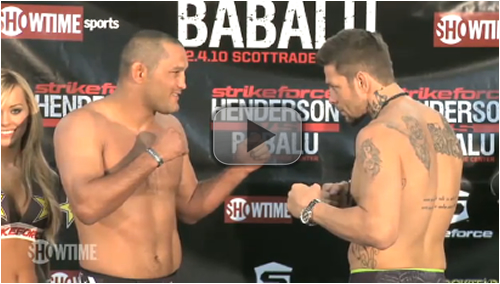