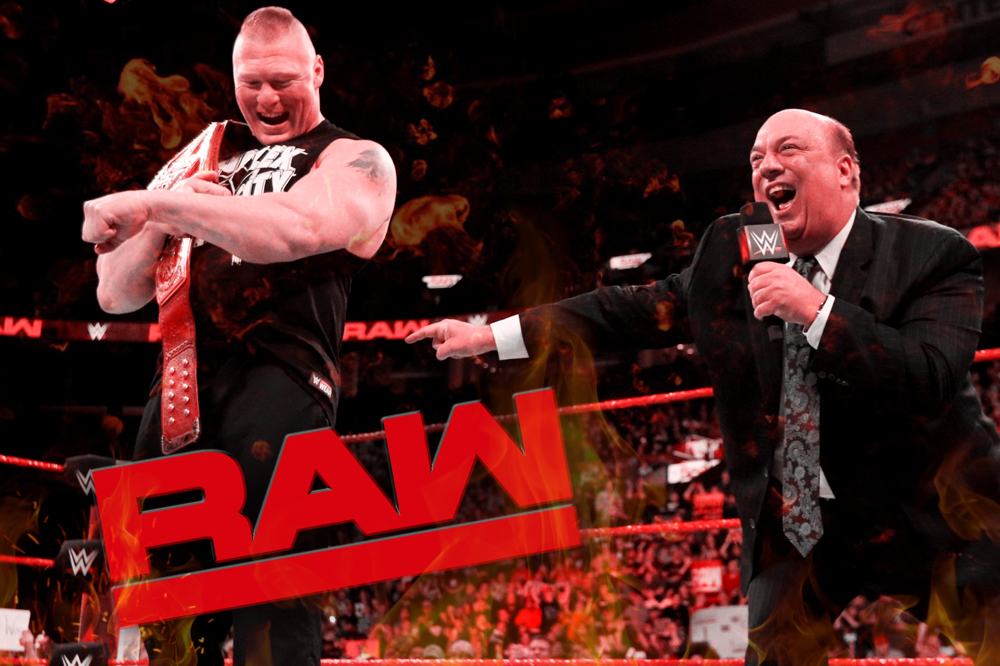 WWE Universal Heavyweight Champion Brock Lesnar (and his Advocate, our boss Paul Heyman returned to Monday Night RAW to reflect on what happened at WrestleMania and hype the Greatest Royal Rumble event this Friday in the Kingdom of Saudi Arabia. According to WWE.com:

The last time the WWE Universe saw Brock Lesnar, he elbowed Roman Reigns into a gory defeat at WrestleMania to retain the Universal Championship. One day later, he signed a new contract with a surprising proviso: That The Beast would defend his title against Reigns once again in a Steel Cage at the Greatest Royal Rumble event. Now, five days before the showdown in Saudi Arabia, we found out how both Superstars feel about it.

Brock, unsurprisingly, remains unworried. As Paul Heyman explained, it’s his job to gloat. Lesnar simply attacks. And during his contract negotiations, he used his biggest bargaining chip — the Universal Title — to force the Cage Match stipulation specifically because it was the closest thing to a UFC fight that the former cage-fighter could select. Now, with the ink dry on his contract and a home-field advantage of sorts, The Beast had one more objective in mind: To “shred Roman Reigns to pieces” and send him back to the States in “multiple boxes.”

Also unsurprisingly, Reigns was equally unworried. Despite his loss at WrestleMania (to say nothing of the looming threat of Samoa Joe at WWE Backlash), Reigns confronted The Conqueror with a simple promise to his longtime enemy — that no matter how he returned from Saudi Arabia, he would have the title with him — and made his exit in confident fashion. That may not be enough to convince the crowing Heyman that a Lesnar victory is anything but a foregone conclusion, but if there’s one thing this series has taught us, it’s that nobody knows what’s going to happen, and it may well be Reigns who leaves Saudi Arabia as the spoiler.