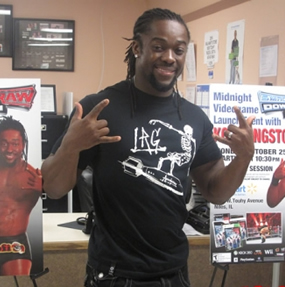 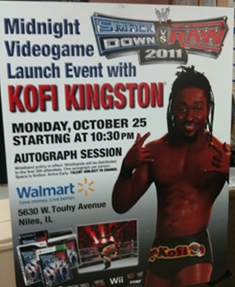 THQ sponsored a Kofi Kingston Autograph Signing to promote the WWE Smackdown vs Raw 2011 video game, and the popular former Intercontinental and United States Champion was a complete gentleman to all those who waited patiently in line for the WWE Superstar’s signature.

CLICK HERE FOR CUSTOM BOX COVERS FOR YOUR WWE SMACKDOWN VS RAW 2011 VIDEO GAME (AVAILABLE FOR Wii, PS3, and Xbox360)!

THE HEYMAN HUSTLE‘s very own Hollywood Charlie was on hand in Niles, a suburb right outside of Chicago, Illinois to photograph Kofi’s appearance, and reported "Kofi is one of the best in WWE when it comes to interacting with fans. He spends time with each person, and makes them feel quite special. It’s obvious he’s enjoying himself, and making the most of this period in his life when he is recognized as a true superstar in sports entertainment!"

We’re HustleTweeting about Kofi, and you’re more than welcome to join the conversation. Don’t be left out! Follow the Hustle on Twitter HERE or write to us at hustleoncrave@gmail.com

You can  also subscribe (for free, cheapos!) to our Ultra High Quality YouTube Channel HERE, and check out our old school social networking skills by visiting us on Facebook HERE and even on MySpace HERE

CLICK ON THE PICS BELOW TO SEE THE ENTIRE GALLERY
FEATURING KOFI KINGSTON AT THE THQ AUTOGRAPH SIGNING! 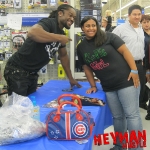