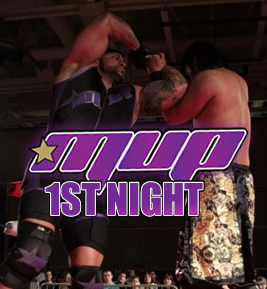 As he described during his SHOCKINGLY OPEN CONVERSATION WITH DAVID LAGANA, MVP used to watch ECW on television while finishing up a federal prison sentence in Florida. Once he broke into professional wrestling, he told all who would listen that New Japan was his favorite style, and becoming a champion in that organization was the honor he considered the most prestigious he could shoot for.

In this, the first part of our series looking back at MVP’s historic title victory, we review his win over Kazuchika Okada in Rahway, New Jersey, enabling The Ballin’ Superstar From The 305 to advance into the semi-finals.

You can follow MVP on Twitter (be prepared to engage, he’s quite interactive with his fans) HERE

We, of course, are HustleTweeting about MVP’s remarkable career growth after voluntarily leaving WWE on his own accord, and you are more than welcome to join the conversation by following THE HEYMAN HUSTLE on Twitter HERE or write to us at hustleoncrave@gmail.com

CLICK ON THE PICS BELOW TO SEE GEORGE TAHINOS’ OUTSTANDING
EXCLUSIVE GALLERY OF MVP VS KAZUCHIKA OKADA IN RAHWAY, NJ!