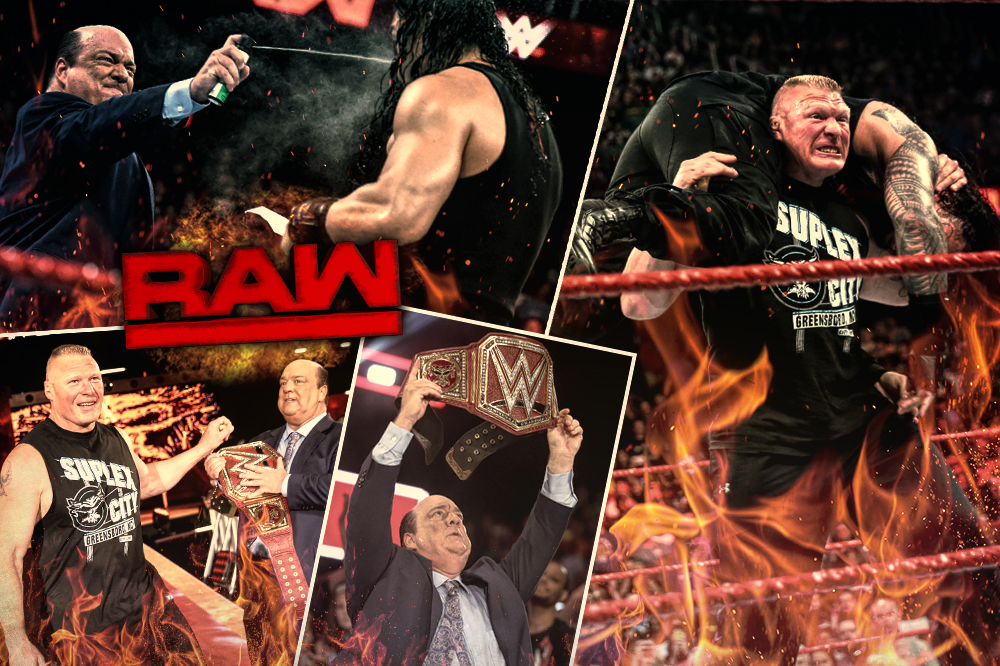 WWE Universal Champion Brock Lesnar and his advocate, our boss Paul Heyman have seen their partnership come to the forefront in the past two weeks on WWE Monday Night RAW. The reigning, defending champion returned to RAW two weeks ago, and caused an uproar the likes of which has seldom been experienced, even on RAW.

All this brings up to Greensboro, North Carolina, home of the final WWE Monday Night RAW before this Sunday’s SummerSlam mega-event. We turn our reporting over to the comprehensive coverage offered by WWE.com:

Paul Heyman’s not up for an Emmy, but maybe he should be. As bereft and bleary-eyed as Brock Lensar’s advocate seemed last week after being manhandled by the Universal Champion, it turned out that he’d simply participated in an elaborate con designed to lull Roman Reigns into the falsest sense of security possible going into the Universal Title Match at SummerSlam.

It was a swindling so convincing The Big Dog wasn’t even able to sniff it out this week, when Heyman, still playing the part of a free-agent kingmaker, returned to seemingly offer Reigns his services as advocate, complete with inside info on Lesnar’s gameplan for SummerSlam. Reigns was understandably suspicious, so Heyman repeated a lesson The Big Dog’s father imparted on them both (in the native Samoan, no less) before producing an agreement in principle that he asked The Big Dog to consider.

But Reigns never really got to take a look at the paper, as Heyman attacked the three-time WWE Champion with pepper spray he had concealed in his suit. That opened the door for Lesnar to emerge, unannounced, and annihilate the blinded Reigns with a barrage of knees to the chest, a suffocating guillotine that put the challenger to sleep and, when Reigns dared to stir, a furious F-5.