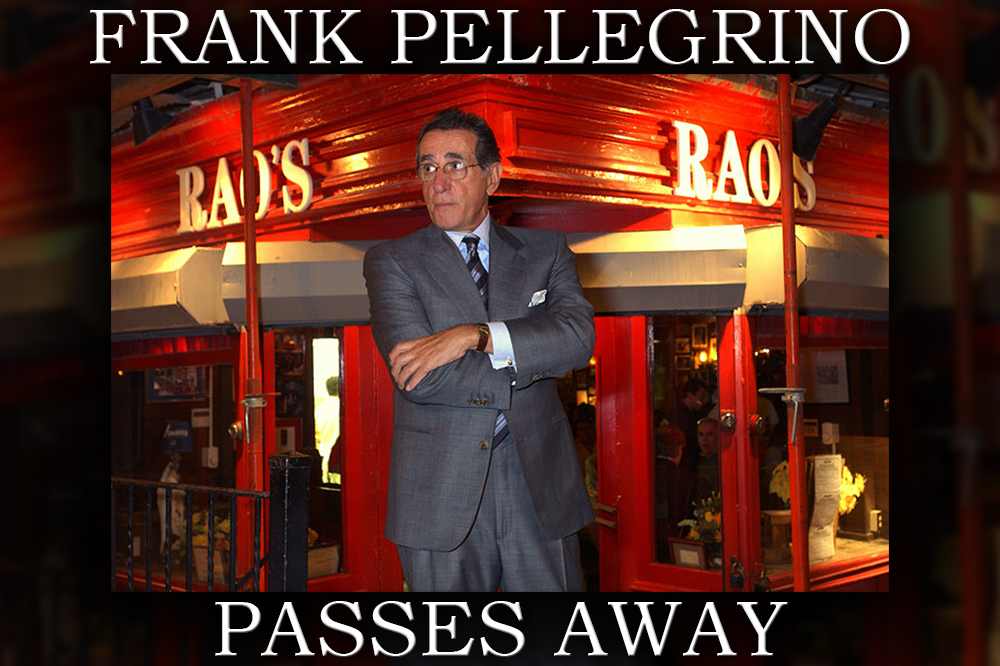 One of the most famous restaurants in the world will never be the same. Rao’s, the East Harlem Italian restaurant immortalized in folklore and movies, has lost the legendary restaurateur Frank Pellegrino Sr. According to his official obituary in The New York Times:

Frank Pellegrino Sr., a sometime actor and the unflappable gatekeeper of Rao’s, his family’s clannish, celebrity-studded and prohibitively exclusive restaurant in East Harlem, died on Tuesday in Manhattan. He was 72.

The cause was lung cancer, his son, Frank Jr., said.

Mr. Pellegrino was a struggling singer playing nightclubs and cruise ships in 1972 when his aunt, whose husband’s father had founded Rao’s, on East 114th Street, in 1896, enlisted him to help out because business was booming.

Mr. Pellegrino became a co-owner and the man to call for a reservation for one of the restaurant’s coveted four tables and six booths — an exercise in crushed hopes for most would-be patrons; Rao’s says it is booked for the rest of 2017.

Mr. Pellegrino came to be called Frankie No for his firm, egalitarian protocol of turning away the disappointed, regardless of rank.

“I don’t need no money, fortune or fame,” he was said to have crooned as he rebuffed the investor Warren E. Buffett one night. “I’ve got all the riches, baby, one man can claim.”

On another occasion, he listened patiently as a caller pleaded over the phone, saying that he was a childhood pal of the beloved parish priest who had recently presided over the annual Giglio di Sant’Antonio festival nearby on Pleasant Avenue. After hearing him out, Mr. Pellegrino replied, “Good, but not good enough,” and hung up.

When the gourmand Jason Epstein ran Random House, he insisted on publishing the first of Mr. Pellegrino’s four Rao’s cookbooks. The gesture gained Mr. Epstein access to Rao’s recipes but not to a regular table.

In 1977, Mimi Sheraton, then the restaurant critic for The New York Times, awarded Rao’s (pronounced RAY-ohs) three stars for its “wonderfully simple, honest and completely delicious Italian food.” The review sealed the reputation of Rao’s as New York’s most exclusive restaurant (and, according to the writer Norman Mailer, Ms. Sheraton’s reputation as “the woman who ruined Rao’s”).

Among the regulars have been the director Martin Scorsese, who cast Mr. Pellegrino as Johnny Dio, the cigar-smoking prison chef, in the 1990 gangster film “Goodfellas.” Mr. Scorsese later filmed a scene from his movie “The Wolf of Wall Street” at the restaurant.

At Rao’s, regulars own their tables like a time share, reserving a table one night a week, for example, or on Christmas. A regular can also lend a slot to family or friends, which meant that getting past Mr. Pellegrino was all about connections.

In the 1960s, when the Genovese crime family dominated East Harlem, the F.B.I. spied on Rao’s from across the street in Benjamin Franklin High School (now the Manhattan Center for Science and Mathematics). One typical surveillance report vaguely concluded, “Hoodlum-type individuals observed entering expensive autos.”

Rao’s survived a mysterious arson fire in 1995 and, in 2003, a murder: A local numbers runner shot an organized-crime figure who had insulted a young singer accompanying the jukebox.

“But before you label the place a ‘mob joint,’” Frank Jr. wrote last year in “Rao’s Classics: More Than 140 Italian Favorites From the Legendary New York Restaurant,” “please consider the fact that Elie Wiesel had also broken bread there.”

Frank Joseph Pellegrino was born in East Harlem on May 19, 1944. His father, also named Frank, was a truck driver. His mother, the former Ida Puccillo, was a seamstress.

He and his cousin Ronald A. Straci inherited Rao’s in 1994 after Vincent Rao and his wife, Anna, died. It was Vincent’s father, Charles, who had bought the saloon from George Ehret’s Hell Gate Brewery in 1896.

In addition to his son, who is the managing partner of Rao’s in Las Vegas and Hollywood, Mr. Pellegrino is survived by his wife, the former Josephine Nicita, and his daughter, Angela Pellegrino. (Rao’s Specialty Foods, which retails marinara sauce and other items, is separate from the restaurant.)

Mr. Pellegrino was a constant presence at Rao’s, sometimes sipping a Chivas at the bar, sometimes puffing on a Parliament 100 on the patio, and always as patient as a turtle as he greeted regulars. Indeed, a favorite pair of cuff links had turtle images on them. According to “Rao’s Classics,” the turtle was his obsession.

“With its impregnable exterior, methodical and plodding style, resilience and pluck (be careful when he snaps),” the book explains, “the turtle is his avatar.”

We’re HustleTweeting on the death of Frank Pellegrino, and you’re more than welcome to join the conversation by following the Hustle on Twitter HERE or by hitting LIKE on our hyper-interactive Facebook page HERE!