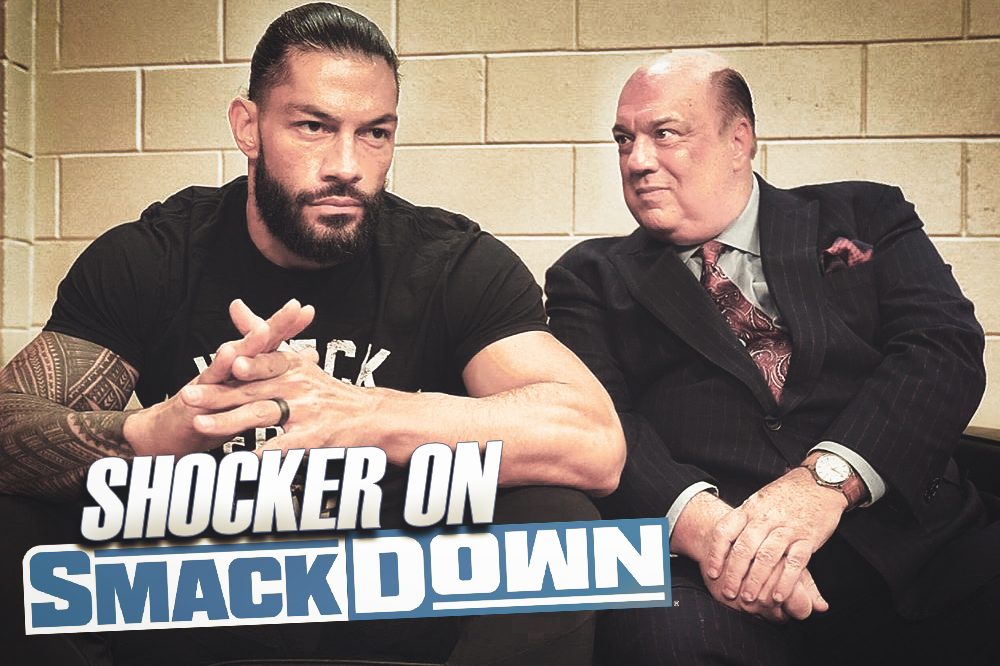 WWE Smackdown ended with perhaps the hottest cliffhanger in ages, not just in WWE but on any form of content, as Roman Reigns (who returned to WWE in shocking fashion at SummerSlam this past Sunday) sent viewers into a frenzy as the show (which airs in the United States on the Fox Network) went off the air with the revelation Roman Reigns was aligned with our boss Paul Heyman.

Just so everyone is clear, we, the staff at the Hustle and our parent company #L4L The Looking4Larry Agency didn’t have a clue this was going on.

According to FOX SPORTS:

The WWE Universe was left stunned when Roman Reigns made his surprise return at SummerSlam this past Sunday – but that was nothing compared to Friday Night SmackDown.

At the end of this week’s episode, The Big Dog revealed he’s formed a new alliance with a familiar foe: Paul Heyman.

OH MY GOD! WE NEVER SAW THIS COMING 😱😱😱@WWERomanReigns has joined forces with @HeymanHustle! #SmackDown pic.twitter.com/kuPfIDkuN8

The scene unfolded perfectly, with Reigns borrowing one of Heyman’s signature catchphrases before the camera panned over to reveal The Advocate himself sitting next to the 4-time heavyweight champion.

Reigns made one thing very clear – he believe he never lost the Universal title, which he was originally scheduled to challenge Goldberg for at WrestleMania before the COVID pandemic forced the Big Dog to opt out of performing for several months.

When Reigns made his return this past Sunday, he had a new edge to him, as he took out both Wyatt and Strowman with what can only be described as, well, a ruthless aggression. Aligning with Heyman would seem to continue that trend toward a new Roman Reigns.

Reigns and Heyman certainly have plenty of history. In 2018, the former member of the Shield engaged in an epic feud with Heyman’s client, Brock Lesnar, culminating in Reigns winning his first Universal Championship at SummerSlam that year.

During that series of altercations, Heyman reminded Reigns and the WWE Universe of his connection to the Big Dog’s family, having managed Reigns’ uncle and spent quite a bit of time backstage and on the road with his father, former WWE Superstar Sika.

Today's #FlashbackFriday is from 1989, which is so long ago I was not yet an #Advocate. I was still a "manager." The team I managed? @WWERomanReigns' uncles (Samu and Fatu aka @TheREALRIKISHI). Learned a lot about Samoan Family Dynasty, culture, mind set, strategy. Hmmmmm…….. pic.twitter.com/yVqudKja34

During that time, we even got a glimpse of what might be to come …

.@HeymanHustle knows a thing or two about spoilers. He told us all about his future alliance with @WWERomanReigns two years ago! pic.twitter.com/Ljd4G0gSos

However, Reigns was forced to relinquish the title due to a recurrence of his leukemia in November of 2018.

He returned the following February, before opting out of action ahead of this year’s WrestleMania due to concerns about COVID surrounding the fact he had newborn twin sons.

Now that he’s back and working with Heyman, there are a few major questions. Is this finally a heel Reigns? (It would certainly seem so, and we’ll likely know 100% for certain on Sunday.) What will Lesnar think? And, perhaps most importantly, can Reigns recapture what he believe is rightfully his?

One thing’s for certain – we never saw it coming.