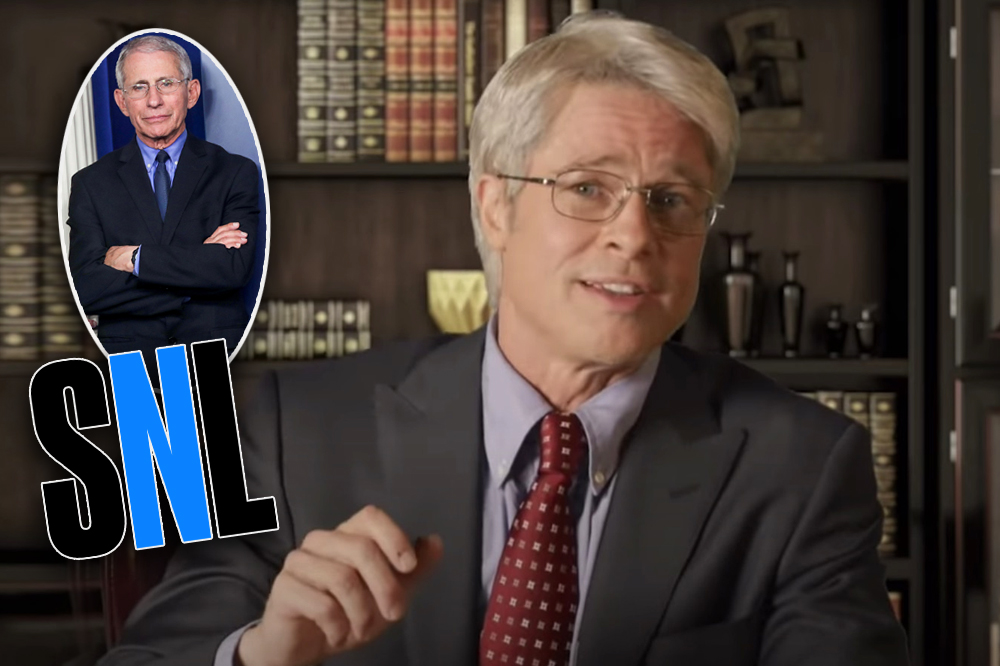 When asked earlier this month which actor he would want to play him on SNL, the nation’s COVID-19 expert told CNN the answer was “Brad Pitt” (stated with a wink and a smile).

In a surprise appearance, Pitt played Fauci at the opening of Saturday’s SNL, which was produced remotely like the episode starring Tom Hanks that aired to mass praise.

“First, I’d like to thank all the older women in America who have sent me supportive, inspiring and sometimes graphic e-mails,” Pitt as Fauci said.

Pitt’s Fauci then explained that there’s been a lot of misinformation out there about the coronavirus, and that “yes, the President has taken some liberties with our guidelines.”

He then said he’d like to explain what President Trump was “trying to say.”

The sketch then proceeded to show clips of Trump talking about the outbreak. The first had Trump saying that the country would have a vaccine “relatively soon.”

“Relatively soon is an interesting phrase. Relative to the entire history of earth? Sure, the vaccine is going to come real fast,” Pitt’s Fauci said. “But if you were going to tell a friend, I’ll be over relatively soon and then showed up a year and a half later, well, your friend may be relatively pissed off.”

The next clip showed Trump saying that the virus would disappear like a miracle.

“A miracle would be great! Who doesn’t love miracles? But miracles shouldn’t be Plan A,” Pitt’s Fauci said. “Even (Capt. Chesley “Sully” Sullenberger) tried to land at the airport first.”

He then said that unless he’s fired he will be there to put out the facts to anyone who’s listening.

“When I hear things like the virus can be cured if everyone takes the Tide Pod Challenge, I’ll be there to say,please don’t,” Pitt’s Fauci added.

After that, Pitt removed his wig and glasses and had a serious message for those watching at home.

“And to the real Dr. Fauci, thank you for your calm and your clarity in this unnerving time,” Pitt said. “And thank you to the medical workers, first responders and their families for being on the front line.”

Pitt then took a beat and kicked off the remote episode of SNL.

“And now, live, kinda, from all across America, it’s Saturday night,” Pitt said.

We’re HustleTweeting about SNL, and you’re more than welcome to join the conversation on the Hustle Twitter HERE and also on our hyper-interactive Facebook page HERE!