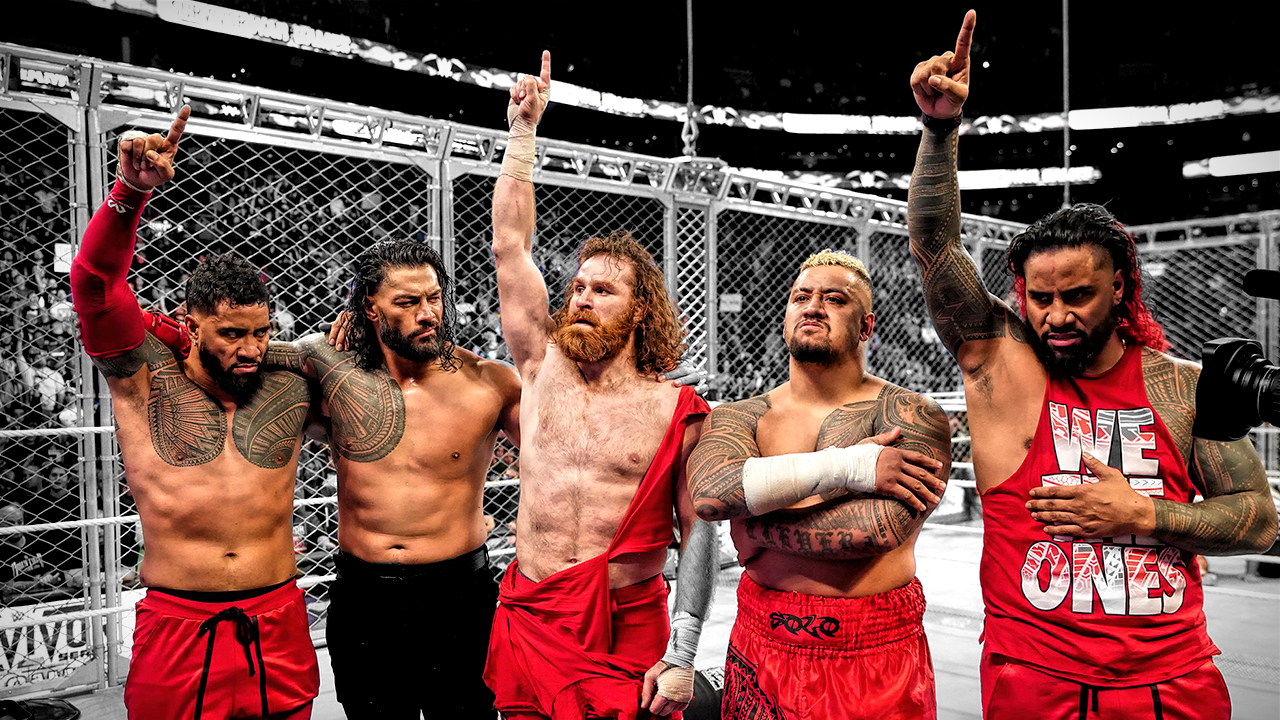 The big story of the night was the fact Sami Zayn proved himself to WWE Undisputed Universal Heavyweight Champion Roman Reigns, our boss and Reigns’ #SpecialCounsel Paul Heyman, WWE Undisputed Tag Team Champions The Usos and Solo with his actions, which took the side of the Bloodline over Sami’s longtime frenemy Kevin Owens.

The match started with Butch and Undisputed WWE Tag Team Champion Jey Uso locked inside the cage. Butch immediately attacked Jey’s hand, manipulating his joints and smashing his fingers. Jey overcame it and slammed Butch into the cage, but Butch kept attacking the injured arm of Jey.

Ridge Holland entered the match next for The Brawling Brutes and knocked down Jey with a pair of shoulder tackles and corner splashes. As the two-on-one beatdown continued, Holland and Butch continued to torture Jey and his injured arm.

Jimmy Uso was prepared to save his brother, but Undisputed WWE Universal Champion Roman Reigns held him back and forced Sami Zayn to go out and prove his loyalty to The Bloodline. Zayn, who’s had a frosty relationship with Jey, went right after Holland and Butch, showing Jey firsthand that they can coexist.

Drew McIntyre became the next man to join the action, and The Scottish Warrior quickly dispatched Uso and Zayn, repeatedly throwing Jey into the cage. As The Bloodline tried to rally, McIntyre used his incredible strength to overpower them both and hit Zayn with a Futureshock DDT.

Jimmy Uso finally was allowed to enter the match, and he brought three tables into the ring with him. Zayn and Jey bickered over who would set up one of the tables, much to the dismay of Jimmy and Reigns.

Kevin Owens brought multiple chairs into the ring upon his entry and immediately began attacking both Usos and Zayn with cannonballs and a top-rope senton. Owens culminated his attack by smashing Jimmy through one of the tables with a side slam.

The enforcer of The Bloodline, Solo Sikoa, arrived to the ring next and clobbered Holland and Butch, sending the latter face-first into the cage. Despite being thrown into the cage and being superkicked, Solo crushed Owens with a back body drop onto the steel between the two rings.

Sheamus entered the cage as the final member of The Brawling Brutes and rallied his teammates to a drubbing of The Bloodline. Sheamus punctuated the attack with a White Noise from the second rope on Sikoa.

Reigns finally entered the ring, and the match officially began with each team drawing the battlelines in both rings. The entire Brawling Brutes team trapped a member of The Bloodline between the two cages and hit them with 10 (or 25) Beats of the Bodhran.

Sheamus clocked Sikoa with a Brogue Kick but turned around into a Spear from Reigns, only being saved from the pinfall by Butch. As the carnage continued, The Usos hit stereo superkicks on Ridge, which Reigns immediately followed with a Spear through a table.

With bodies all throughout the ring, Sikoa hit a Spinning Solo on McIntyre through a table, only for Sikoa to get leveled by a Stunner from Owens. After a Pop-up Powerbomb and a Stunner on Reigns, Owens seemingly had the match won, but Zayn grabbed the referee’s arm to prevent the three-count and save the match for The Bloodline.

As Zayn and Owens argued over loyalty, Zayn used a distraction to hit Owens with an uppercut below the belt and a Helluva Kick, setting up Jey for the winning splash and allowing The Bloodline to come away victorious.

After the match, Reigns extended his arms and congratulated The Honorary Uce with a hug. Moments later, a fired-up Jey followed suit, at long last embracing Zayn while The Bloodline stood tall as Survivor Series WarGames concluded.