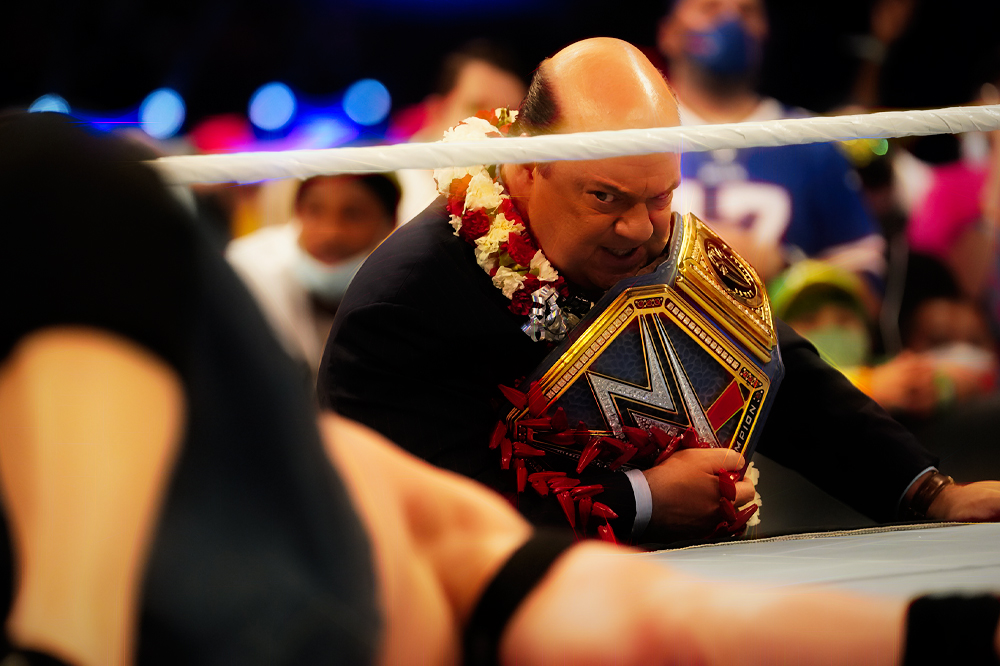 The New York Post interviewed our boss, WWE Universal Heavyweight Champion Roman Reigns’ #SpecialCounsel Paul Heyman about the situation involving Brock Lesnar, returning to Madison Square Garden the night before the 20th anniversary of 9/11 and many other subjects. It’s a fascinating read.

Paul Heyman, WWE Universal champion Roman Reigns’ special counsel, could soon find himself in the middle of one of the biggest feuds the wrestling business has to offer with the return of his former on-screen client Brock Lesnar at SummerSlam. Lesnar will be back on “Friday Night SmackDown” (8 p.m., Fox) this week at Madison Square Garden. Before the big show, Heyman took time for some Q&A with The Post’s Joseph Staszewski

(Edited for clarity and length)

Q: How much are you looking forward to telling this story between Roman Reigns and Brock Lesnar? Obviously, you’re very much at the center of this.

A: I think we all knew this situation was going to come to a head someday. From the moment I appeared on SmackDown television with Roman Reigns, it was, “Oh my God what is Brock Lesnar’s advocate doing with Roman Reigns now?” This is an unanswered question that has to be addressed and no better place to address it than Brock Lesnar’s first appearance on television in 18 months in The World’s Most Famous Arena Madison Square Garden live on television.

Q: How important of a story device was the phone call from Brock Lesnar and the ringtone to immediately establish that unanswered question in the audience’s mind?

Q: So Brock is not a call, you miss his call and leave a voicemail kind of guy? He’s like, I’m going to call 17 times until you pick up?

Q: We have seen a lot of Brock with you doing promos for him fully as a heel. Do you think he views this as a challenge to present himself to the audience in a different way without you and maybe in a slightly more babyface role?

A: I don’t know if we end up in a situation where Brock Lesnar can’t go after a different championship other than Roman Reigns’ and he can have his advocate and Roman Reigns can have his special counsel. There’s a lot of decisions to be made and there’s a lot of scenarios that can play out and I dare suggest anyone who thinks that they have this figured out doesn’t have a clue as to the twists and turns that could and will come in the near future.

Q: What do you think it meant for Roman Reigns the character and maybe the person to kind of put the demons of that 2017 promo with Cena behind him with this WrestleMania feud? Getting the win is one thing, but to have done well and be received so well in the two promos he had with him.

A: I don’t think you can compare The Tribal Chief to the former member of The Shield. I just don’t think it’s a fair comparison. It’s comparing championship Michael Jordan to Michael Jordan playing high school basketball. The years leading up to the emergence of the Tribal Chief were the formulative years of Roman Reigns. It’s why we never were together as far as a pairing until the time was right because he had to have the seasoning. He had to have the experience. He had to take and give the beatings. He had to mature in front of your very eyes. So as Roman Reigns went through his trials and tribulations. … this is not an overnight success. Roman Reigns was handed his success? No, he went through his trials and tribulations in front of the public for many, many years. He just so happened to be at a level that no one else could achieve like four WrestleMania main events while going through trials and tribulations, and then the time finally came for him to reign supreme as The Tribal Chief and this is where he steps into his legendary run.

Q: As a New Yorker, with this show falling around the 20th anniversary of 9/11, it’s the first wrestling show back in New York since the pandemic. Is there any kind of extra meaning for you?

A: It’s really up to the crowd isn’t it? It’s really gonna be the mood of the room. It’s a very solemn anniversary in New York and you can feel it right now in Manhattan, especially in downtown Manhattan. If the audience comes there in unison as New Yorkers looking to enjoy a show the night before the 20th anniversary then that’s gonna be the mood of the room. And if the audience is there to share the emotionality and the enormity of the anniversary then we’re gonna share that with them as well.

Q: What do you remember about that day in Houston from the first WWE show after 9/11?

A: What do I remember most? Lilian Garcia. And here’s the funny part of it. I was on autopilot, I was so shell-shocked over the events of 9/11 I don’t really remember that much. I don’t remember anything that happened on the show. I remember Vince (McMahon) talking to me on my headsets and I remember J.R. (Jim Ross) just in whatever words he used just letting me know, “Follow my lead kid, we’re gonna be just fine.” But I was a wreck, so I to this day cannot tell you if Lilian Garcia sang the national anthem or ‘God Bless America’ or ‘America the Beautiful.’ I don’t remember what she sang. I just remember her singing it. I just remember being there and the power of her voice and how it just captured the moment and how enormous the accountability was that J.R. and I had in delivering that show to the audience on television as far as explaining what was transpiring in front of your eyes and hopefully taking your mind off of what was going on in the world for a mere two hours.

Q: What are the challenges of trying to do commentary that night? You are trying to entertain, but there is obviously a very different mood, maybe not in the building, but definitely at home.

A: The challenges are to be cognizant of the fact that you’re the escape. And that people are turning to you not to be reminded of what’s going on but actually to take a respite from it. And no matter what you’re going through personally or feeling inside your heart or soul, your obligation to the audience is to provide them with the momentary distraction that they have turned to you for.

Q: You had a match at Madison Square Garden in 2012 against Ryback. Was that a thrill for someone who grew up watching matches at the Garden?

Q: You said in your ‘Out of Character’ interview that you drew from your dad for the advocate. Is there something or someone you’ve drawn from for the special counsel?

A: I think the special counsel is the natural progress of the advocate and I feel very closely aligned in my personal and professional lives with the special counsel because I’m older. I’m the Wiseman. Roman Reigns likes to call me the Wiseman and I am. I feel that I am the Wiseman. I navigate our trajectory from a perspective of grand experience at the highest levels sports entertainment has ever offered.

Q: What do you think the potential is for Becky Lynch in this heel/tweener kind of role and how much of an uphill battle is she fighting against an audience that wants to cheer her?

I’m not a big believer in the positioning of people as protagonists and antagonists, I think these personalities have multiple sides to them. Events in life will change your perspective, demeanor and the way you address people. So, if there is a more coarse side of Becky’s personality that is now coming to the forefront and you’re a fan of Becky then embrace it and accept it. And if you just judge someone by their immediate actions and their short-term perspective then I guess you now have a villain for whom you can root against.

Q: You were part of the industry and that moment when we had ECW and WCW and WWE all at the same time that everyone points to as the golden era or the standard for what the industry can be. Where do you think the industry is now and what’s the potential for things when you have multiple, viable companies at one time now?

A: Any industry can never go wrong when the consumer has a choice.

Q: What are your thoughts on potentially adding Naomi into your group?

A: I don’t look at only one person as a potential addition to The Bloodline. I think there is a daily assessment as to what The Bloodline needs and what the presentation requires on television. At the moment I think we are addressing the enormous box office attractions that are now coming back seemingly all the time against the Tribal Chief and the fact that The Usos, who are reigning defending SmackDown tag team champions, are being pushed to the limit by the best tag team to come along besides The Usos in the past 20 years, the Street Profits. We’re telling quite a few stories right now. As the year continues and we get into 2022, are there more stories to tell involving other personalities? I’m sure that there are. And just because someone is not on television with us doesn’t mean they’re not within eyesight of The Bloodline and doesn’t mean they’re not a member of The Bloodline. It just means we’re not presenting them on TV as such.

We’re HustleTweeting about Roman Reigns – Paul Heyman – Brock Lesnar, and you’re welcome to join the conversation on the Hustle Twitter HERE … on our ridiculously sensational Instagram HERE … or on our Facebook page HERE!