Gabe Sapolsky: Why You Should Order This Friday Night's Dragon Gate USA Internet Pay Per View! 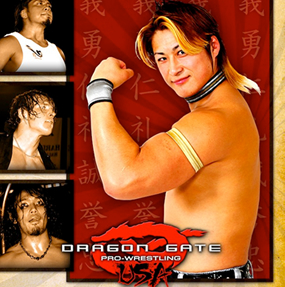 Tomorrow night (October 29, 2010), Dragon Gate USA will present "Bushido: Code of the Warrior" on on live iPPV through www.GoFightLive.tv. Live internet pay-per-view is a new frontier for independent wrestling. It is our greatest hope in the face of a dwindling DVD market and increased online pirating.

I’m approaching it with a big, giant chip on my shoulder.

So is the entire DGUSA roster.

Not to sound like a movie slogan, but this show is very personal for me. It is personal for all of us at DGUSA. The reasons, mind you, are simple.

I co-created Ring Of Honor and fought battles for that company for almost seven years. When the time came to show my skills with the HDnet TV show, the opportunity was taken away from me. When TNA talent approached Dixie Carter about giving me an opportunity, those in creative shot it down without even an interview. Now I have a chance to show the world what I can do with a live broadcast for the first time. I want to show them all what they missed out on. Then you look at the talent on the show. They all have just as much motivation, if not more, to show the naysayers as I do.

Homicide has returned to independent wrestling with one goal, which is to make the scene stronger for everyone. He is tired of the big company politics and locker room drama. He wants to show everyone how valuable he can be when he’s just allowed to be himself.

Austin Aries is surrounded by an air of mystery after his odd departure from Ring Of Honor. In a promotion that normally gives their departing wrestlers a hero’s exit, the only man to be crowned ROH Champion on two separate occasions has quietly vanished. Now he is looking to remind the world why he is one of the most talented wrestlers on the planet, and one of the most controversial as well. We will give him a live mic with no script this Friday.

That’s not some hype. That’s the truth. I promise. And Aries intends on delivering the goods.

Jimmy Jacobs blurred the lines of work and shoot when he went into vivid detail of his battle with drug addiction in the "Jimmy Jacobs Revealed" series on YouTube. Now he needs to show everyone that he is clean, has his head on straight, and is ready to take his career to the next level.

Jon Moxley always says he was born to be a loser, but he made himself into a winner. He has developed a character based around his obstacles in real life that is connecting strongly with independent wrestling fans. Now he needs that one memorable performance to turn that corner and become a true star.

Brodie Lee was first booked by me on the night I was fired from ROH. We had big plans. Those plans fizzled a month later when Lee’s program against Necro Butcher was prematurely blown off. Lee’s brief ROH run can only be called disappointing. Now he wants to wipe that memory away.

Rich Swann lost his parents when he was just 16. Now only a few years older,  he sees wrestling as his chance to somehow make them proud and realize his dreams. He is working with a true veteran in Homicide. This is his chance to put himself on the map.

Chuck Taylor, Ricochet, Johnny Gargano and Arik Cannon are all on the brink of turning that corner and making their reputations. They will all be in a DGUSA trademark "Freestyle" match. They will be given the spotlight in a style of match that comes straight out of the action sports genre.

Then you have the Dragon Gate roster. They really don’t have a chip on their shoulder. They have nothing to prove. These are the most charismatic, skilled and athletic wrestlers in the world. The main event of BxB Hulk vs. Shingo for the Open The Freedom Gate Title is a can’t-miss match. These two are familiar rivals in Japan. Their hair vs. hair bout a few months ago has been called a strong Match of the Year candidate. The iPPV will be headlined by the rematch.

In my opinion, there is nothing like the Dragon Gate style of tag team wrestling. We have taken four of the very best wrestlers in Dragon Gate, and put them all in one match when CIMA & Genki Horiguchi take on the younger generation team of YAMATO & Akira Tozawa. They have nothing to prove, well on second thought maybe they do.

There is a different system in Japan. When you come up in a promotion, 90% of the time you stay with that company for life. There is a strong loyalty, which is a two way street. This means that the Japanese roster takes great pride in the Dragon Gate name. Their goal is to spread the brand worldwide. Everyone from Open The Dream Gate Champion Masato Yoshino to the office staff wants to showcase that the Dragon Gate style is the best. The live iPPV this Friday gives them the platform to accomplish those goals. You better believe they will make the most of it.

In fact, you better believe we will all work our hardest to make a lasting impression. Individually, we all have something to prove. Collectively, we will show everyone why they need to stand up and take notice.

I believe in this product. I am proud of my association with it. You know the old expression, "we’re going to give you everything we got" … well, we’re saying it, and we mean it.

I sincerely hope you’ll join us this Friday night as DGUSA goes live on Internet pay per view!

=====================
Gabe Sapolsky is the co-founder of DGUSA.  "Bushido: Code Of The Warrior" will be broadcast live from Fall River, Massachusetts this Friday at 8pm EST. You can order the event HERE   DGUSA will present its final event of 2010 this Saturday in Rahway, NJ. For more information or to order tickets, go to www.DGUSA.tv.