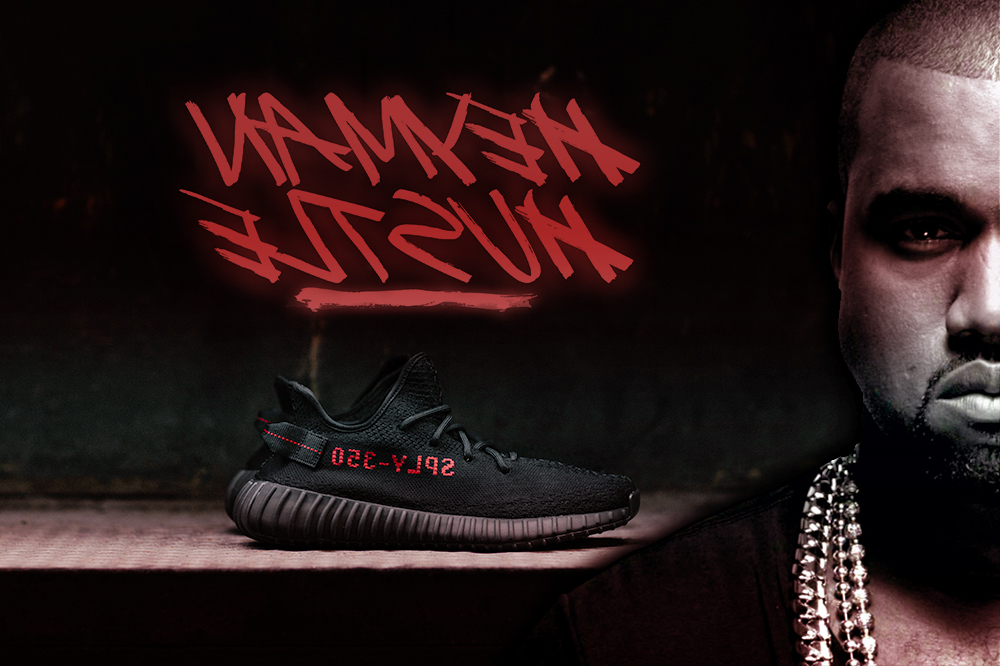 When it comes to sneakers and street fashion, the iconic Yeezy collaboration between Kanye West and Adidas knows how to generate buzz. This weekend, there’s a whole new reason to get excited, as the next Adidas Yeezy Boost 350 V2 in “Black/Red” has been announced, and it drops this weekend.

The previous Yeezy V2 release in the Oreo colorway (CLICK HERE to see our EXCLUSIVE coverage) sold out at all major retailers and distributors within minutes, and the “Black/Red” promises to be no different. The striking difference in this new pair is the prominent color stripe from preceding Yeezy V2 drops, containing the mirrored SPLY-350 branding, being camouflaged due to the all-black Primeknit material construction. A brand new heel tab, previously only seen on the original Yeezy Boost 350, provides a refreshing change to the now 6th colorway released for the Yeezy V2 silhouette in as many months. Also featured on the sneaker are center stitching, a translucent rubber outsole and TPU sidewalls – all on top of revolutionary Adidas boost cushioning midsole technology.

If you want to get your hands on a pair, act fast. The Adidas x Kanye West Yeezy Boost 350 V2 ‘Black/Red’ drops on Saturday, February 11th at various major Adidas stores and retailers, in-store and online, with a price tag of $220 USD ($140 USD for infant sizes). Getting a pair in-store involves having to brave the harsh winter weather camping overnight, something most of us aren’t willing to do. Your best chance lies in having your payment details copied and refreshing Adidas.com/yeezy at around 9AM EST, keeping an eye out for online outlets such as Foot Locker, Champs Sports and Kicks USA afterwards. Scroll through the gallery below for a closer look at the next Yeezy drop, and keep coming back to The Heyman Hustle for more sneaker news – we have it on VERY good authority that Yeezy isn’t done dropping heat for February yet.

So, yo bunch o’ Hustlin’ Sneakerheads, what are your thoughts on this next drop? Holding out for the next colorway? Join the conversation by following the Hustle on Twitter HERE, on Snapchat at HeymanHustle, or by hitting LIKE on our hyper-interactive Facebook page HERE!